The challenge word on sugarfrostedgoodness.com is “nice”. 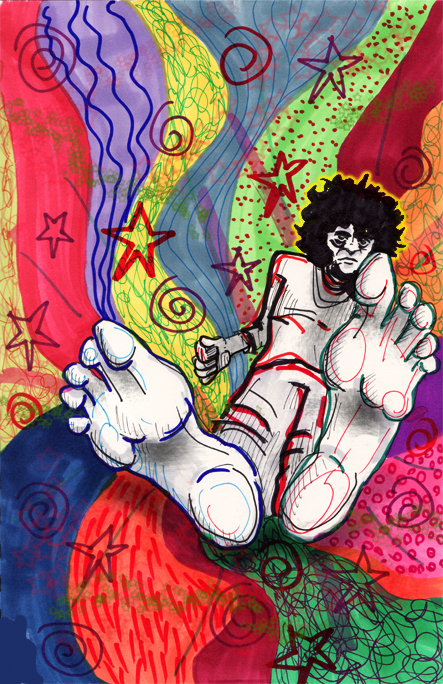 Syd Barrett was a founding member of Pink Floyd. He provided the musical direction and psychedelic influence in the band’s early work. He recorded two albums with Pink Floyd and two solo releases before mental illness and heavy drug use put him into a self-imposed seclusion lasting more than thirty years.

Due to his abundant use of LSD, Barrett’s behavior on stage was unpredictable. He would strum on one chord through the entire concert. Sometimes he would not play at all. At a show at The Fillmore West in San Francisco, during a performance of “Interstellar Overdrive”, Barrett slowly detuned his guitar. The audience seemed to enjoy such antics, unaware of the rest of the band’s consternation. Before a performance in late 1967, Barrett apparently crushed Mandrax and an entire tube of Brylcreem into his hair, which subsequently melted down his face under the heat of the stage lighting, making him look like “a guttered candle”.

Following a disastrous abridged tour of the United States, David Gilmour, a school friend of Barrett’s, was asked to join the band as a second guitarist to cover for Barrett as Barrett’s erratic behavior prevented him from performing. For a handful of shows David played and sang while Barrett wandered around on stage, occasionally playing. The other band members soon tired of Barrett’s antics and, in January 1968, on the way to a show at Southampton University, the band elected not to pick Barrett up: One person in the car said, “Shall we pick Syd up?” and another person said, “Let’s not bother”.

Years later, in 1975 during the recording sessions for the “Wish You Were Here” album, Barrett showed up at the session unannounced, and watched the band record “Shine On You Crazy Diamond”  a song, coincidentally, about Barrett. By that time, Barrett had become quite overweight, had shaved off all of his hair, including his eyebrows, and his ex-bandmates did not at first recognize him. Eventually, they realized who he was and Roger Waters was so distressed that he was reduced to tears.

Barrett died in July 2006 of pancreatic cancer. The occupation on his death certificate was given as “retired musician.”

In 2006, his home in Cambridge, England, was placed on the market and attracted considerable interest. After over 100 viewings, many by fans, his house was sold to a French couple who bought the house simply because they liked it – reportedly they knew nothing about Barrett.

Syd Barrett once said, “Fairy tales are nice.” In his mind, he likely experienced a bunch of fairy tales.