The illustrationfriday.com challenge this week is “repair”. 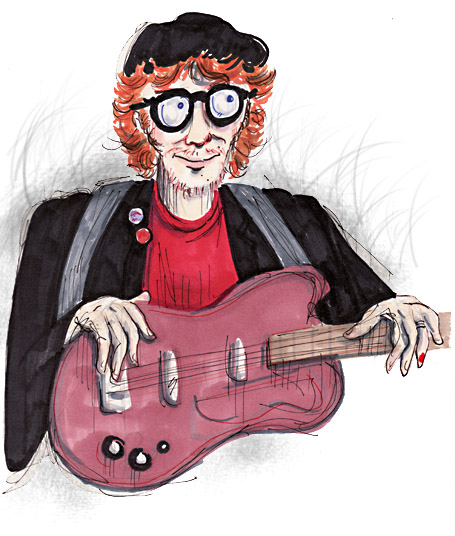 This guy is one of the coolest guys I know. And I’ve known him for a very long time. Twenty-one years, as a matter of fact.
He began to read at three. He recognized Beatles songs and sang Grateful Dead songs at four. He began to master Hebrew by second grade. He gained a vast musical knowledge that stretched across many genres and reached far beyond his years. He is as smart as a whip, having made dean’s list in four consecutive college semesters. He hosts a weekly four-hour internet radio show (that is also broadcast on local HD radio here in Philadelphia), where he manages to sneak in some selections from his own eclectic musical tastes among the regular alternative rock programming. He assists in production on a popular long-time folk music radio show. He plays guitar, bass, ukelele and digeridoo. He’s a vegetarian. He doesn’t drive (by choice).  He has given me inspiration for many of my illustrations. And he can really make me laugh.
Early one August morning in 1987, several hours after Joan River’s husband commited suicide in a Philadelphia hotel room, this cool guy was born. He weighed nine pounds and six ounces. He measured twenty-four inches long. I told his mother, “At that size, when he’s sick, aren’t you glad he doen’t have to go back in for repairs?”
I watched this cool guy come into the world.
This story continues to be written.