This week’s challenge word on Monday Artday is “zombies”. 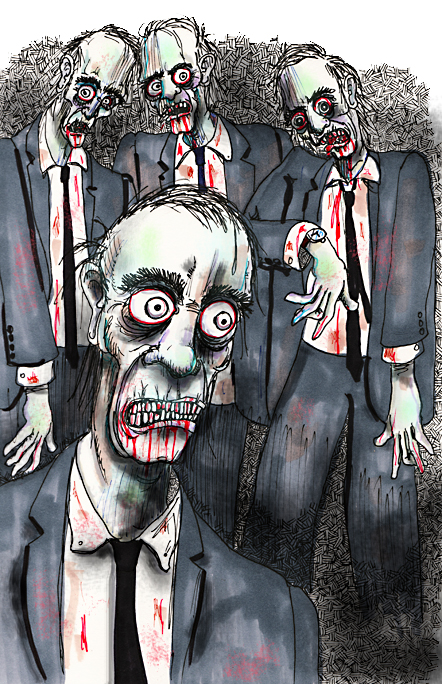 A zombie is a reanimated human corpse. Stories of zombies originated in the Afro-Caribbean spiritual belief system of Vodou.

One origin of the word “zombie” is “jumbie”, the West Indian term for “ghost”. Another is “nzambi”, the Kongo word meaning “spirit of a dead person.” According to the Merriam-Webster dictionary, the origin is from the Louisiana Creole or Haitian Creole “zonbi”, and is derived from Bantu. A zonbi  is a person who is believed to have died and been brought back to life without speech or free will. It is similar to the Kimbundu nzúmbe  ghost.

Filming took place between June and December 1967. Props and special effects were fairly simple and limited by the budget. The blood, for example, was Bosco Chocolate Syrup drizzled over cast members’ bodies. Roasted ham was used for consumed flesh. Costumes were purchased at second-hand clothing shops, and mortician’s wax served as zombie makeup.

Romero produced the film for $114,000, and after a decade of cinematic re-releases, it grossed some $12 million domestically and $30 million internationally. On its release in 1968, “Night of the Living Dead” was strongly criticized for its explicit content. In 1999, the Library of Congress included it in the National Film Registry as a film deemed “historically, culturally or aesthetically important”.

And in the course of the entire 96 minutes that the movie runs, the word “zombie” is never spoken.