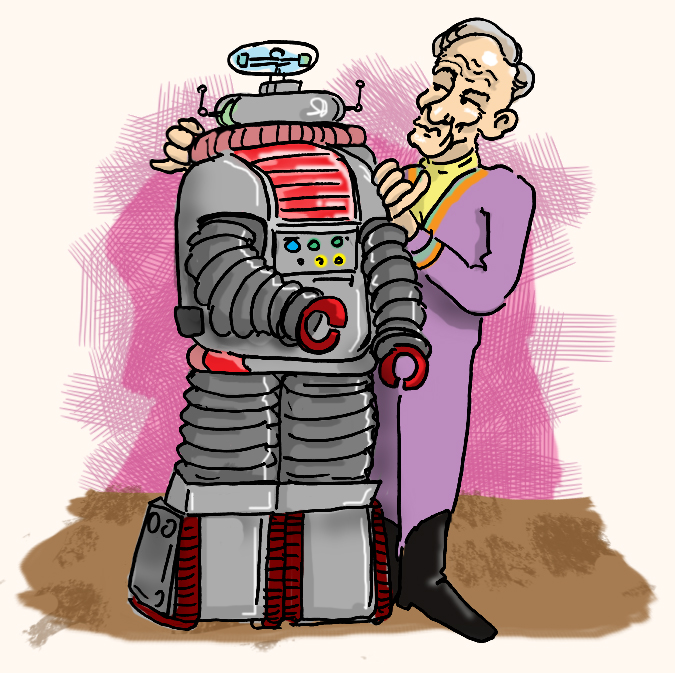 In the futuristic world of 1997, Earth’s population has hit an all-time high and the continued boom poses a major threat to the planet. Professor John Robinson, his wife Maureen, their children Judy, Penny and Will and hunky Major Don West are sent to establish an annex colony in the Alpha Centauri star system. They set out on their mission aboard their ship, the Jupiter 2. Unknown to them, Dr. Zachary Smith, a medical doctor hired by a foreign government to sabotage the crew’s environmental-control robot, has stowed away on the Jupiter 2. His extra weight throws the ship off course and they become….

When the show was originally conceived, Smith was a minor character, but character actor Jonathan Harris made the role bigger than life and stole the show. His rapport with the robot (acted by Bob May and voiced by Dick Tufeld) was the highlight of each episode. The robot — programmed to be straight-laced and by-the-book — was a constant target of ridicule by the self-centered, egotistical Smith. Harris played the part to its most irritating, most annoying hilt. He was an instant fan favorite. As the series continued and gained popularity, more episodes centered around the Smith character, much to the chagrin of other cast members, especially Mark Goddard, who played Major Don West. Goddard voiced his resentment as his role (and amount of lines) were greatly reduced in order to showcase the decidedly more comedic antics of Smith and the robot. Harris actually rewrote and ad-libbed the majority of Smith’s dialog. He interjected his signature phrases like “Oh, the pain! The pain!” and “Will, dear, dear boy!” when he felt the scene needed an extra bit of humor. Harris admitted that he sometimes stayed up nights thinking of new alliterative insults for the robot that he often used on the show (Clod-like Collection of Condensers; Jangling Junkheap; Lily-Livered Lead-Lined Lummox)

After three seasons, Lost in Space was canceled due to high production costs, displeasure from a CBS executive and waning interest from some cast members (although all of these reasons are disputed). Jonathan Harris continued to appear in numerous guest roles on television. He became an in-demand voice actor, providing characterizations for an array of animated films and television shows. The voice of Manny the Praying Mantis in Pixar’s A Bug’s Life was one of his last roles. He passed away in 2002 at age 87. He was survived by his wife of 64 years.

This is the first illustration for the word “robot”. Here is the second.

Here is another illustration for the word “robot” that I did in 2008.