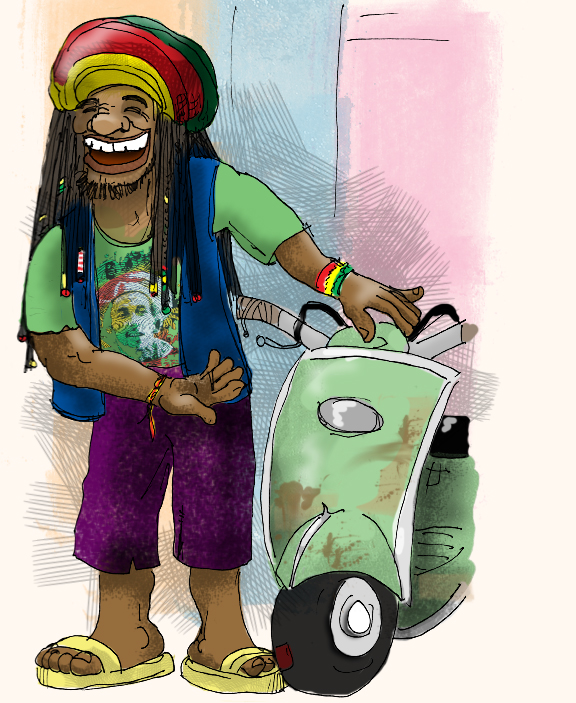 My wife and I went on a cruise at the end of May. It was her second and my first. I had always balked at taking a cruise. I enjoy doing all the things that a cruise offers — obscene amounts of food, extravagant yet hokey stage shows and time away from work. All fine with me, but why does it have to be on a ship? In the middle of the ocean? I can do all those things in a resort on land. Land that can’t sink. And if, by chance, there is a power failure and the plumbing backs up and the hallways are suddenly flooded with shit — I can just hop in my car and go home. I can’t do that on a ship.

But, I agreed and we went.

We were booked on the Norwegian Cruise Lines massive ship Gem for a seven-day excursion to The Bahamas, with stops at Port Canaveral, Florida and Norwegian’s private island Great Stirrup Cay, before docking in Nassau. I was not really excited by the thought of the trip, mainly because I had nothing to which I could make a comparison. My only frame of reference for a cruise was The Jungle Cruise in Disneyland and The Love Boat. I knew I the captain wouldn’t be cracking corny jokes about the back side of water, but I sort of hoped that Isaac would be slinging Mai Tais in the Pirates Cove lounge.

We left New York’s Pier 88 under overcast skies and that’s how it remained for the majority of our trip. Day One and Two at sea were rough and rocky. A constant drizzle enveloped our vessel as large, angry waves lapped at the ship’s sides. It was not pleasant. Luckily, there was an endless array of food to distract us. And a casino. Mrs. P dug the casino.

On Monday (Memorial Day), we docked at Port Canaveral. We disembarked (I was happy to be off that goddamn ship and on solid, non-rocking ground) and boarded a charter bus for an hour’s drive to Orlando. We planned to spend the day at Downtown Disney, the expansive shopping area at Walt Disney World. The weather broke and we were presented with a beautiful day. It would be our last for a while.

Bright and early on Day Four, announcements were made explaining that despite the inclement weather (it was fucking pouring), tender boats would be shuttling guests to the private island for a (possible, if the rain stops) beach party with (possible, if the rain stops) outdoor music and a (possible, if the rain stops) barbecue. The enormous ship could not pull up close enough to the tiny dot of sand that is the deceptively-named Great Stirrup Cay. Instead, guests are to board tender boats in order to get to the island. A tender boat is sort of a water taxi and they look about as safe as a taxi … if one were floating in the ocean. They are not unlike the boat that rescued Red Buttons, Ernest Borgnine, Jack Albertson and those two annoying kids in The Poseidon Adventure — and we know how that turned out. (A shitty sequel and three of those actors are dead.) My wife and I passed, opting instead to spend the day playing group trivia and checking out the buffet. After another rocky night at sea, the Gem docked at Nassau. I was kind of looking forward to seeing the sights of the tiny island nation. From our ship’s deck, I could see the pastel-colored buildings, the soaring willowy palm trees and the exotic aura of the Atlantis Resort off in the distance. Anxiously, Mrs. P and I made our way to the gangway and set our feet on Bahamanian soil. My expectations sank. The dock area looked like the parking lot of a closed factory. Broken, dirty concrete. Open, rusty trash dumpsters. Hardly the romantic setting I had imagined. We continued with the exiting crowds to a large building that served as Customs and a tourist marketplace. After flashing our passports, we strolled through the makeshift stalls outfitted with faux driftwood signs and plastic island flowers. The food stands boasted such indigenous cuisine as hot dogs and Coca Cola. Several tourist couples were posing with a tarnished and ratty sequined-costumed mannequin. As we exited the building, a few skanky-looking female locals swarmed around, enticing my wife to get her long, lovely hair braided. She politely declined. (The last thing she would do is allow one of these “ladies” to touch her hair.) As we approached the exit gate headed into the small cluster of Nassau shops and restaurants, we were, again, accosted by an enterprising young man who was pacing in front of a line of dated and faded Vespas.

“Hey, mon!,” he began in his island-tinged accent, “How ’bout you rent a scootah? See de island on a scootah, mon.” He was cheerful and smiling as he offered his persuasive pitch.

He sidled up close to me and, lowering his voice, he asked, “Pah-tee, mon? You want t’ pah-tee?” He raised his fingers up to his lips and toked on an imaginary joint. He nodded his head and smiled broadly. “Pah-tee, mon?”

Welcome to Nassau. Here are your choices of activities — rent a rusty scooter or get high. 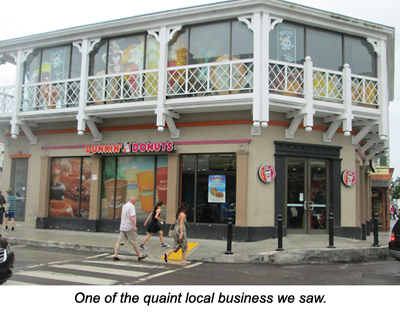 The rest of Nassau was just as inviting. The narrow streets were lined with one run-down structure after another. Open-air stores stocked an inventory of cheap, generic Bahamas t-shirts and plastic souvenir whatevers, all emblazoned with some sort of Greetings from Bahamas sentiment. Garbage-strewn vacant lots were poorly concealed behind the brightly-painted buildings. On the main street, cars — unrestrained by traffic signals (or laws, for that matter) — weaved to avoid hitting the malnourished horses pulling rickety carriages. After nearly an hour of navigating the uneven sidewalks and fearing that we’d be dragged into an alley to be robbed and murdered, we made our way back to the ship. Nassau looks like the setting of every Caribbean drug deal movie you’ve ever seen.

It began to rain. Hard. Very hard. We hurried back to the dry sanctuary of the Gem, where we could shower and change into some clean clothes. And eat.

Finally the clouds disappeared and our last day at sea was filled with calm waters and sunshine. Mrs. P took her place on a deck chair, exclaiming, “I’ve been waiting six days for this. If you need me, I’ll be right here.” I don’t have much patience for sitting and doing nothing so I wandered off to find something to do. I watched one of the ship’s chefs carve fruit into animal shapes. I watched a crew member twist balloons into animal shapes to the delight of a giddy crowd of children. I listened to a drunken lounge pianist bang out unrecognizable melodies on the ivories in a tedious game of Name That Tune. I got some ice cream. I read a little. I got some more ice cream. And a brownie.

I found Mrs. P poolside, still on the deck chair where I had left her five hours earlier. She had acquired a beautiful golden tan. She was happy. We left to get ready for dinner. Now, I was happy.

We have another cruise booked for February.

(For another take on my recent cruise, read my post on “It’s Been a Slice” …. HERE.)