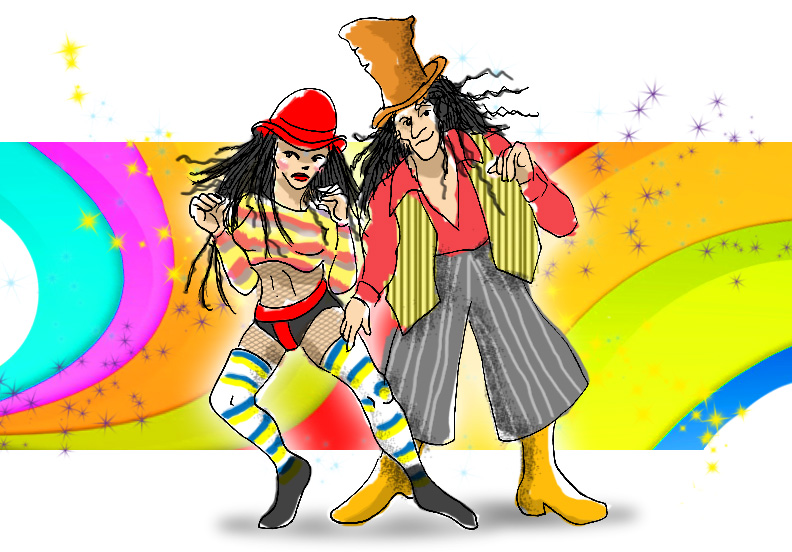 It was summer in Philadelphia in the early 1980s. I was scooping ice cream on South Street to help pay my tuition for art school. Bubblegum pop radio station WIFI had just shaken up their format, re-emerging as “I92 – Rock of the 80s”. As disco was becoming passé, I92 dove headfirst into the popularity of New Wave music, hoping it was a bankable decision. At the ice cream parlor, we cranked the New Wave full blast, utilizing it two-fold  to drown out the chugging fans and to welcome eager customers. The whole staff was animated by the music, dancing joyously as we balanced frozen treats on fragile cones and piled toppings on enormous sundaes. And, in turn,  it translated to entertained and contented patrons.

Among the top selections by The Pretenders, The B52s, Talking Heads and Eurythmics (whose big hit was ice cream-ized by the scoopers as “Whipped Cream is Made of This”), I92 mixed in the occasional novelty tune. Once an hour, we were treated to Angel and the Reruns’ ode to Anissa Jones, “Buffy Come Back” and Total Coelo’s dancey and nonsensical “I Eat Cannibals” . But the one we all waited for was Haysi Fantayzee’s “Shiny Shiny”. As soon as that angelic female voice offered the opening prayer of “Good times come to me now”, the entire place collectively smiled and braced themselves for three minutes and forty-two seconds of pure delight. When the gritty male vocalist spewed his raucous rhymes over a soundtrack punctuated by fiddles and jangling bells, we were frenzied.

Haysi Fantayzee was the brainchild of Paul Caplin, a visionary songwriter/manager/producer/musician from London. Paul was a former member of Animal Magnet, a synth-pop band that accompanied pop superstars Duran Duran on their first national tour. Paul paired his then-girlfriend, vocalist Kate Garner with 20-year-old singer/songwriter Jeremy Healy, carefully dressed them in funky, mismatched thrift-store chic, and produced an amalgam of country, reggae and tribal rhythms reminiscent of contemporaries Bow Bow Wow and Adam and the Ants. The songs, described as political and sociological nursery rhymes set to quirky music, were contained on the band’s one and only album, aptly titled Battle Hymns For Children Singing.  The band became darlings of the music video era MTV. While being interviewed on the groundbreaking music channel, Jeremy Healy even accused Culture Club’s Boy George of stealing his look.

But, fame was fleeting and the the members of Haysi Fantayzee went their separate ways in late 1983, after releasing four successful singles from their Certified Gold debut/swan song.

Now, unlike other stories of ill-fated notoriety that appear in this blog, the only thing to meet an untimely demise in this tale was the band itself.

Jeremy Healy went to become one of the most in-demand and respected DJs on the international club scene. He has produced albums for Gwen Stefani, George Michael and, ironically, Boy George. Jeremy has worked extensively with prestigious clothing designers as musical director for fashion shows, including a decade-long relationship with Victoria’s Secret. He also married and divorced actress Patsy Kensit (but then again, who hasn’t).

Kate Garner retired from the singing end of the music business, in favor of pursuing her love of photography. Kate’s photos appear on the cover of Sinead O’Connor’s 1987 debut, The Lion and the Cobra.  She has photographed everyone from Dr. Dre and Bjork to Anne Hathaway and Angelina Jolie. Her work has been featured in GQ, Harper’s Bazaar, Vogue  and Elle. More recently, Kate took a stab at wallpaper design with one of her creations securing a spot in London’s Victoria and Albert Museum.

Paul Caplin totally abandoned the music business in favor of a more lucrative venture – software. Paul is the founder and CEO of Caplin Systems, a web trading technology company. His bio page on his company’s website makes no mention of his former career.