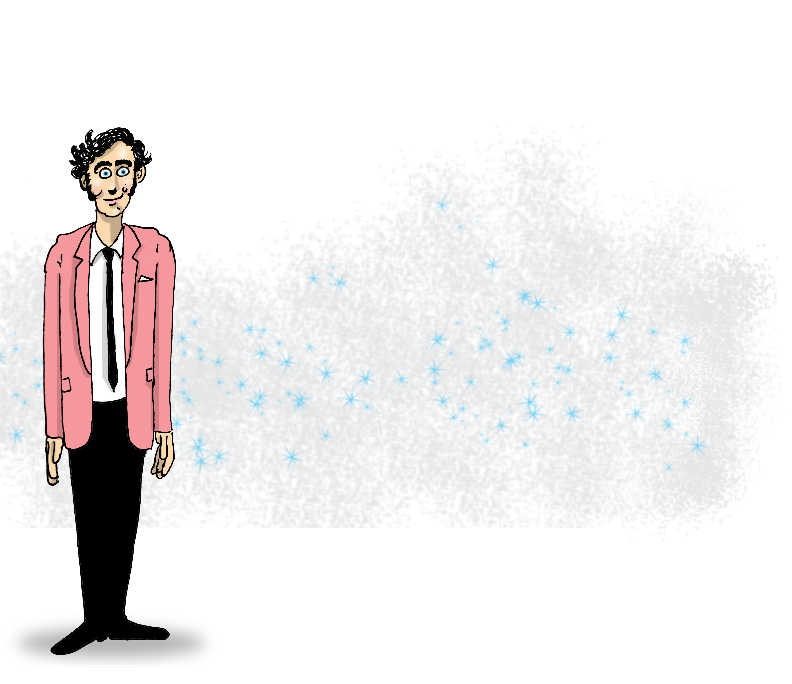 Andy Kaufman took the whole world for a ride.

From his beginnings as a stand-up comic, Andy marched to his own beat. When he performed a short bit on the premiere episode of NBC’s Saturday Night Live,  no one knew what to make of him… and that’s just what Andy wanted. After an introduction by guest host George Carlin, Andy took the stage and set up a small phonograph. He stood quietly as a recording of the Might Mouse cartoon theme played — to the awkward chagrin of the studio audience. When the tune reached the familiar “Here I come to save the day” lyric, Andy bounced and gestured dramatically, lip-syncing the words perfectly… then resumed his position and waited for the line to roll around again. When he finished his unusual act, he thanked the crowd in an a unplaceable, but decidedly foreign accent. On a subsequent appearance, he did disastrous impressions of President Carter and Archie Bunker, each in the same uneasy, foreign-tinged voice. The confused studio audience rewarded him with nervous, awkward giggles. Then, he announced his finale — an impression of “de Elvis Presley.” After brief preparation of fixing his hair and altering his clothes to reveal previously hidden sequin accents, Andy transfixed the audience with a dead-on impersonation of The King.

And so began Andy’s life-long quest to baffle everyone.

Andy was a hot property on the stand-up circuit and was soon cast on the sitcom Taxi,  playing mechanic Latka Gravas, a variant of his “Foreign Man” character. He began playing larger venues when his popularity increased and audiences came in droves never knowing what to expect from one of his shows. He gave one performance with his grandmother seated prominently on the stage for the entire show. At the show’s conclusion, it was revealed that Andy’s “grandmother” was fellow comedian Robin Williams concealed under heavy theatrical makeup. Another show concluded with Andy taking the entire audience — twenty busloads — out for milk and cookies. Sometimes, Andy would punish his audience by reading the novel The Great Gatsby,  never yielding even as complaining patrons left the venue. Even as Andy’s fame and recognition heightened, he regularly and dutifully worked as a busboy at Jerry’s Famous Deli in Los Angeles.

Andy gave an infamous performance on the late-night ABC show Fridays  (a knock-off of Saturday Night Live ). He appeared in a sketch in which he broke character and refused to deliver his lines. Cast members grew furious and the audience was bewildered. Cast member Michael Richards (in an early pre-Seinfeld  role) dumped a stack of cue-cards on Andy’s head and producer Jack Burns took a few swings at the comedian. It was all a elaborate practical joke masterminded by Andy.

While on Taxi,  Andy introduced obnoxious lounge singer Tony Clifton and insisted he be given a role on the show. Again, it was another hoax, as Clifton turned out to be Andy in disguise.

In the early 80s, Andy switched gears and adopted a leering, abhorrent personality, becoming the self-appointed “Inter-Gender Wrestling Champion of the World.” He wrestled women, taunting and humiliating them, offering $1000 to any woman who could pin him in the ring. Among his “opponents” were his friend, singer Laurie Anderson. Andy accepted a challenge from professional wrestler Jerry Lawler. During their match, Lawler delivered a piledriver that seriously injured the much-smaller Andy. A hospitalized Andy threatened a lawsuit. Years later, it was revealed to be a hoax executed by long-time friends Andy and Lawler.

In late 1983, Andy’s family expressed concern at the persistent cough Andy exhibited during a visit for Thanksgiving dinner. Andy, a life-long, non-smoking, health conscious vegetarian, was diagnosed with a rare type of lung cancer. He took all sorts of measures to combat the disease, from special diets to chemotherapy to psychic surgery performed in Philippines. Keeping his illness a secret from the public, Andy passed away from kidney failure in May 1984 at the age of 35. Once again, Andy’s death was believed by some to be just another extravagant prank. A year later, when Tony Clifton appeared at The Comedy Store in Los Angeles, those beliefs were reinforced. (Tony was actually portrayed by Andy’s long-time collaborator Bob Zmuda.)

Although, Andy had the last laugh.