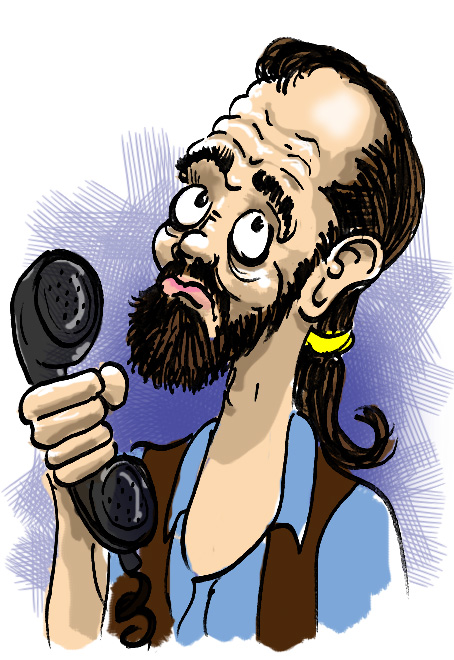 I was always a big fan of George Carlin, the original purveyor of counterculture, hippie humor. I remember watching him on The Tonight Show, always amused by the hearty laughs he coaxed out of host Johnny Carson. I remember hearing a George Carlin comedy album at a friend’s house and rolling on the floor in hysterics at his infamous “Seven Words You Can Never Say on Television” routine. I also recall being intrigued by the clean-shaven, crew-cut sporting version of George that I saw on clips from the old Ed Sullivan Show and reruns of That Girl.

After watching countless HBO specials and appearances on various variety shows, I finally got to see George perform live several years ago at the Stardust Hotel in Las Vegas. The Stardust is no longer there and, sadly, neither is George. He passed away on June 22, 2008 at the age of 71.

George Carlin gained millions of fans during the fifty years his career spanned. In addition to myself, Mark Feldstein can be counted among those fans. Mark, the son of Mad Magazine  co-creator and long-time editor Al Feldstein, tells about a personal relationship with the comedian this way…

How I Was Stalked By George Carlin *

My father, Al Feldstein, was co-creator and editor of Mad Magazine for 29 years. When I was a teenager in the late 70’s, my dad took me to a George Carlin concert. He called ahead and set-up a “meet and greet” with George after the concert using his cache as editor. We waited expectedly until finally a crew member apologized to us that George couldn’t make it – he wasn’t feeling well. I survived. Three years later, I received a phone call at college from Dad, “Mark, George Carlin just called and left his number. Why don’t you call him back?”

I dialed the number and George himself answered! Before I could fully introduce myself, George blurted,”Mark! I wanted to apologize for not meeting you at my concert three years ago.”

That prodded me back to reality, “But, George, that was three years ago.” (I figured that this conversation couldn’t get any stranger, so why not call him “George?”)

“Flashbacks!” he announced, “These damn drugs!”

As you can imagine, I graciously forgave him. And thought that was the end of my George Carlin story. Little did I know.

Five years later – I had graduated and moved to Los Angeles (from New York) and Dad calls. Oh, yes,you can see it coming.

I called. “Mark! I just wanted to apologize for not meeting you at my concert those years ago!”

Okay, this was just a little strange. “George, you already called five years ago to apologize.”

George: “I did? Damn these flashbacks!”

Mark: “George, tell you what. Take out a piece of paper and get a pen.”

Mark: “Now write this down. ‘I have already apologized to Mark Feldstein.”

Mark: “Now put the note in your wallet, George.”

So, as it sometimes happens in life, strange things happen in threes.

Years later, I was working in a small special effects production house called Coast Productions. They are the ones who make the Pillsbury Doughboy giggle so adorably. Well, guess who walks in one day to discuss the special effects of his upcoming movie? Need I say it? I waited for the meeting to end and snuck into the conference room and held out my hand and said, “Hi George. My name is Mark Fel….”

As a footnote, Mark told me, “Every word of the story is true. Dad even told me that George sent him scribbled apologies on yellow pad paper, too, but I never saw those.”