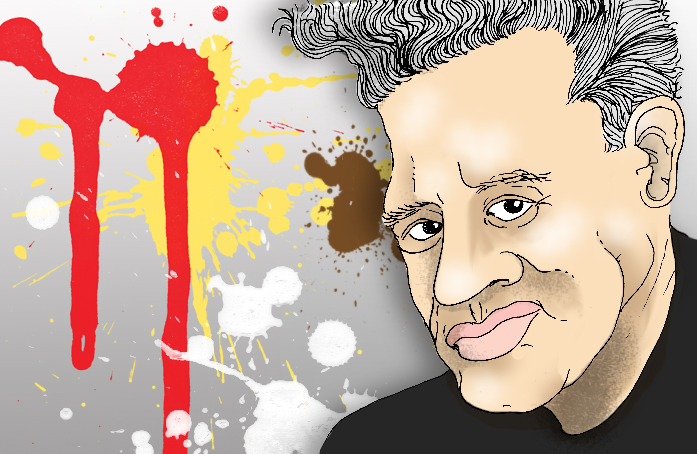 No matter what anyone says, Andres Serrano is an artist in every sense of the word (or at least by Andy Warhol‘s definition). Like Ansel Adams, his medium of choice is photography and he photographs ordinary subjects in an artful fashion. Unlike Adams, Serrano finds beauty in decidedly different objects. Serrano’s prints share a commonality in their inclusion of human bodily fluids  blood, urine, semen, feces, mother’s milk  and a slant towards the controversial.

Andres Serrano has exhibited series of photos depicting corpses, burn victims, firearms, Klansmen and, most notorious, iconic religous symbols submerged in the photographer’s own urine. Serrano’s displays have been a constant source of contention. His works have been criticized, protested and even vandalized all over the world. Several examples of his work were defaced at a gallery in Sweden. His photograph Piss Christ,  depicting a small plastic crucifix resting in a glass of Serrano’s urine, was attacked with a screwdriver at a gallery in Australia. Despite the negativity, Serrano is a multiple award winner, including  but not limited to  honors from the New York Foundation for the Arts and the National Endowment for the Arts.

I have been drawing since I was a little kid. I have been receiving criticism for approximately just as long. I have maintained this blog for nearly five years and I have received my share of negative comments about my illustrations. And I don’t mind. I actually enjoy  comments from strangers telling me “that I suck” and “have no talent” and “my work is disgusting.” It makes me smile. I feel if someone takes the time to read and study something that I have created and it pisses them off so much that they need to tell me, then I have succeeded in holding their attention for more than a fleeting moment. And that’s quite an accomplishment in this time of major distraction. (Here is an example of one such episode from a few years ago.)

I’m sure Mr. Serrano is well aware of the people who oppose and vilify his style of expression, but it does not seem to stop him. In fact, I’d be willing to bet that it brings him the strengh and inspiration to continue.

I know it does for me.