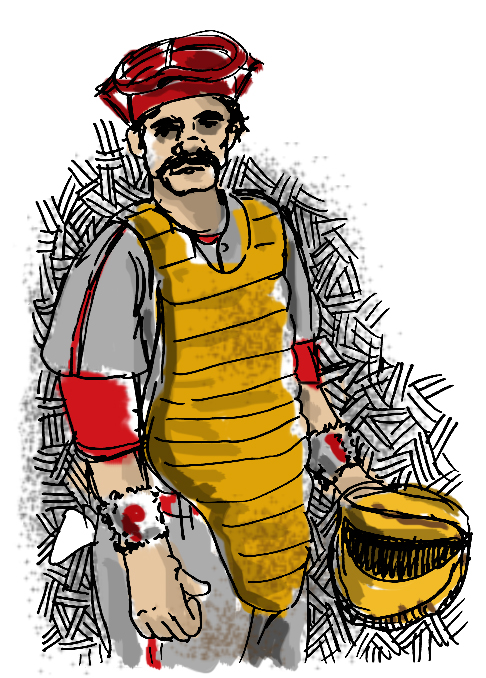 After bouncing between the minor leagues and the bigs, Bo Díaz was traded to the Philadelphia Phillies in the ’81 off-season. With the departure of All-Star catcher Bob Boone, Bo became the Phillies starting backstop. His game-calling skills helped Phils ace Steve Carlton become the league’s only twenty game winner in 1982. Bo finished the season with offensive and defensive stats ranking him second among National League catchers, behind the Expos’ Gary Carter.

Early in the ’83 season, Bo accomplished a feat only performed by eleven other players in baseball history. With the Phillies down 9-6 in the bottom of the ninth with two outs, Bo hit a game-winning grand slam. He ended the season catching Steve Carlton’s 300th career win. In the final week of the 1983 regular season, Bo hit .360 (including a game in which he went 5 for 5), helping the Phillies to the post-season. Despite losing their World Series bid to the Baltimore Orioles, Bo was the Phillies’ leading hitter.

Bo continued for as long as he could, but several more knee surgeries and a shoulder injury forced him to retire on July 9, 1989 at the age of 36.

For nearly twenty years, Bo played winter baseball in his native Venezuela for the Leones del Caracas.  In 1973, 20-year-old Bo caught a no-hitter thrown by pitcher Urbano Lugo. Thirteen years later, he was behind the plate for a no-hitter hurled by Lugo’s son, Urbano Jr.

In November 1990, Bo was at his home in Caracas, adjusting the position of a large satillite dish on the roof. The dish accidentally tipped over and Bo was crushed to death beneath its weight.