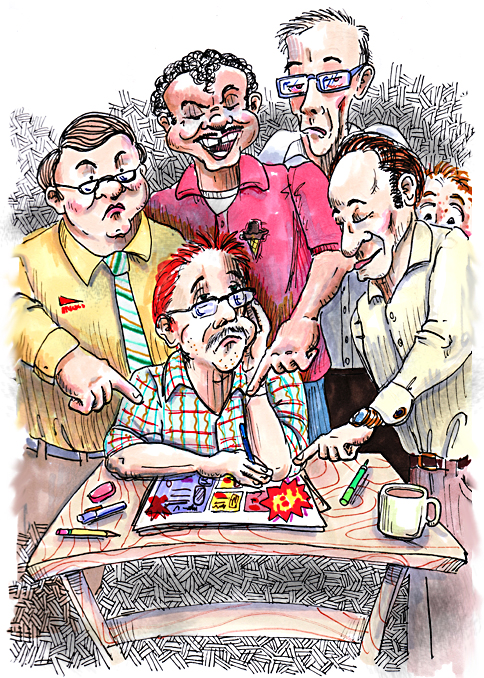 I have chosen a very unusual career. Im an artist. For most of my life, Ive had to explain exactly what I do and its never been an easy task. Everyone knows what a policeman or an accountant does. My father was a butcher; even vegetarians knew what he did. But, being an artist is different. Unless you are an artist yourself, you can never know how  different.

When I was a kid, I drew a lot. When the other neighborhood kids were out playing, Id be in the house drawing. My older (and way more athletic) brother would often question my mother about my behavior, but still Id draw. Id doodle the inhabitants of worlds that existed in my mind. Id create characters and illustrate their adventures in elaborate, multi-paneled comics drawn on any spare blank piece of paper I could get my hands on. I decorated my side of my shared bedroom with my drawings as a strange dichotomy to the sports pennants that graced my brothers allotted space.

I was an average student in school, excelling only in areas that allowed me to express my artistic prowess. Assignments requiring me to create some sort of poster were my specialty. My classmates were amused by the little scribbles Id pass around just out of the realm of the teachers gaze. As my schooling progressed, I began to consider my future plans and options of employment. By high school, most of the teachers of my academic subjects, exasperated by my disruptive and borderline-rude behavior, tossed me out of their classrooms. I gravitated to the art department where I felt comfortable, though not always welcome. As a senior, I had one art instructor who was not much older that I was. She was a sort of mentor to me. One day, without my permission, she submitted a drawing of mine to a local student art show. When I found out, I was furious, as I was not into any type of competition. When she handed me the Third Place medal that my piece had won, I was still a bit annoyed, but secretly pleased with my accomplishment. And when she told me that I showed endlessly more talent than she ever did, I was bewildered. I also decided, much to the chagrin of my parents, that I would pursue a career as a professional artist.

Despite little support or encouragement from my parents, I enrolled in a small, but reputable art school in Philadelphia. Offering no academic courses in favor of a full palette of all aspects of art study, it was a difficult curriculum. But the teachers were seasoned professionals in the commercial art field and I learned a lot. I received in-depth instruction and (mostly) constructive criticism from fellow artists whom I viewed as peers. Four years later, with my Associates Degree and honed portfolio, I felt I was prepared to face the worst that the working world could dish out. The deceptively optimistic scenarios depicted by my teachers left me with little idea as to how bad it really would be.

I eagerly began my career as a professional artist as the art director for a chain of popular ice cream parlors. I was responsible for producing the advertising, store signage and material connected with promotion and marketing of the business. For a first job, right out of school, I thought it couldnt get better or more fun than ice cream. Well, the gentleman who owned the company was the sleaziest, slimiest, shiftiest asshole I had ever met (at least up to that point in my life). He often told me he wished he had more time to teach me from his vast experience of advertising, composition, color theory and general artistic knowledge. The only things that this jerk-off could teach me were smoking, gambling and adultery. He knew how to make chalky-tasting ice cream and that was the extent of his talent. Another executive who felt it was within the boundaries of his expertise to offer me his career guidance was the companys general counsel. Protecting an ice cream companys legal interests and rights would seem the ideal background with which to critique my creative and artistic output.

And so began my lifelong battle with bureaucratic decision-makers whose latent artistic tendencies were hindered only by their complete lack of talent. For twenty-five years, I have been hired by organizations that were impressed by my imaginative illustrations, my unique eye for design and my keen wit, only to have those same people belittle and vilify my work out of frustration over their own creative inadequacies. I have been subjected to the artistic judgment of accountants, lawyers, computer geeks, carpet salesmen and one VP who  I swear to God  was stoned every second of the day. The so-called powers-that-be are less concerned with producing a quality piece of work than they are with arrogantly showing that they have the last word. I have been told, after hours of higher-ups poring over an ad crammed with arrows and bursts and bold type and hundreds of products, to change a small block of background color from red to yellow. I have been asked to make this bigger, but not too big. I have changed and changed back and changed again, only to have the final decision revert back to the original incarnation. Logos made large, pictures made small, logos made small, pictures made large  Ive heard it all!

In the eyes of those outside of the creative field, this is the easiest job in the world. I fool around on the computer all day, for Christs sake!  I draw funny pictures with pencils and markers. Kindergarten kids do that! Thats not a job!  Thats not work! I have witnessed some colleagues being told that an eight-year-old who is pretty good on the computer could do this job.

Conversely, artists are rarely critical of each other. I think we all agree that art is totally objective. Whos to say what is good and what is bad. Its all just different and thats what makes it all good. My friend Matt is a phenomenal artist. When I see his illustrations, I want to toss my pens and sketchbook in the trash and take up a more respectable trade like plumbing. Then, Im taken aback when he lavishes praise on a drawing of mine that I would consider sub-par. We tend to be harsher critics of our own works than the works of others. If the perspective is out of kilter in my drawing or I mess up the rendering of a hand or foot, the mistake is amplified, if only in my eyes. I do, however, resent when I am cut down by someone who doesnt know their ass from a hole in the ground.

I consider myself lucky. Of the 42 students who graduated with me from art school in 1984, I am one of but a handful who continued to follow their dream. A recent reunion revealed that many opted for non-art-related fields as diverse as nursing and home-construction. I plugged along and have managed to maintain an unwavering run in my chosen profession for over twenty-five years. I openly admit that I have voiced my share of un  or under  appreciated opinions, but I felt I was standing up for my convictions. I know that I will never be Picasso or DaVinci, nor do I want to be. I know that I am not smart enough to be a nuclear physicist nor do I pretend to be. I just want to be an artist and do my job. Now, get the fuck off my back.