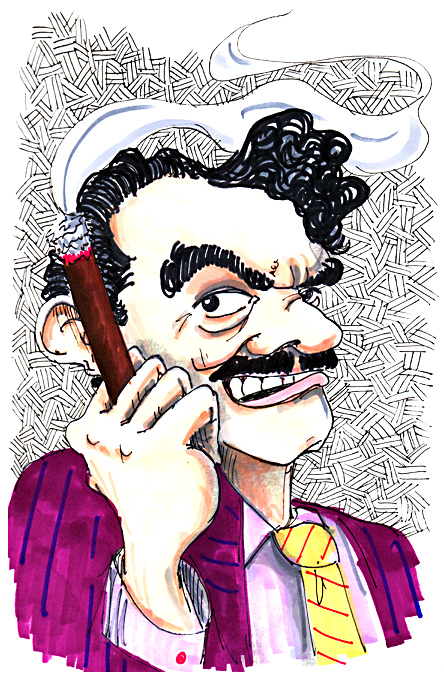 From his humble beginnings as a disc jockey, Ernie landed his own early morning show on Philadelphia NBC-affiliate WPTZ (now KYW). The program, Three to Get Ready, was a blank canvas for Ernie’s creativity. Employing a variety of camera tricks and stage settings, Ernie developed a rapid-fire repertoire of skits, pantomimes and visual illusions for, basically, his own amusement. He figured no one would be watching at the pre-dawn hour at which his show was broadcast. Much to the surprise of both Ernie and the network, the format was a hit. Ironically, it led to the cancellation of Ernie’s show in favor of a network-wide morning show called Today.

While at WPTZ, Ernie created and honed his menagerie of characters including intellectual Percy Dovetonsils, German disc jockey Wolfgang von Sauerbraten, horror show host Auntie Gruesome and bumbling magician Matzoh Heppelwhite. A series of popular monthly specials made way for Ernie’s own show in the 1950s and a twice-a-week stint filling in for Steve Allen as host of The Tonight Show. The biggest stars of the day lined up to appear and perform with Ernie. When he introduced the musical comedy group The Nairobi Trio on this show, it was made up of Ernie as conductor, Ernie’s wife Edie Adams, and close friend, Academy Award winning actor Jack Lemmon, all hidden behind rubber ape masks.

After his seven year marriage to Bette Wilcox ended, he was awarded custody of their two daughters, due to Bette’s unstable mental health. Bette kidnapped the girls, but after a long search and with the help of girlfriend Edie Adams, he regained custody. Ernie and Edie were married in Mexico in a ceremony performed entirely in Spanish, a language that neither one of the couple spoke.

Ernie had brief success in movies, with roles in  Wake Me When It’s Over  and the Richard Quine-directed  Operation Mad Ball and Bell Book and Candle.

In January 1962, Ernie met his wife at a party hosted by Milton Berle. Ernie left in his own car and drove through a heavy southern California rainstorm. While distracted, possibly to light a cigar, Ernie lost control of his car and crashed into a utility pole. He was thrown halfway out of the passenger side of the car and died instantly from head and chest injuries. When Edie learned of the crash, she frantically called the police. When she identified herself, she heard a voice, muffled by a hand over the telephone receiver, say, “It’s Mrs. Kovacs. He’s on his way to the coroner  what should I tell her?” Jack Lemmon identified Ernie’s body at the morgue when Edie was too distraught to do it.

At the time of his death, Ernie was negotiating for the role of Melville Crump in Stanley Kramer’s It’s a Mad, Mad, Mad, Mad World, with Edie playing his wife. Sid Caesar took the part in the finished film.