The weekly challenge on the Illustration Friday website is “focused”. 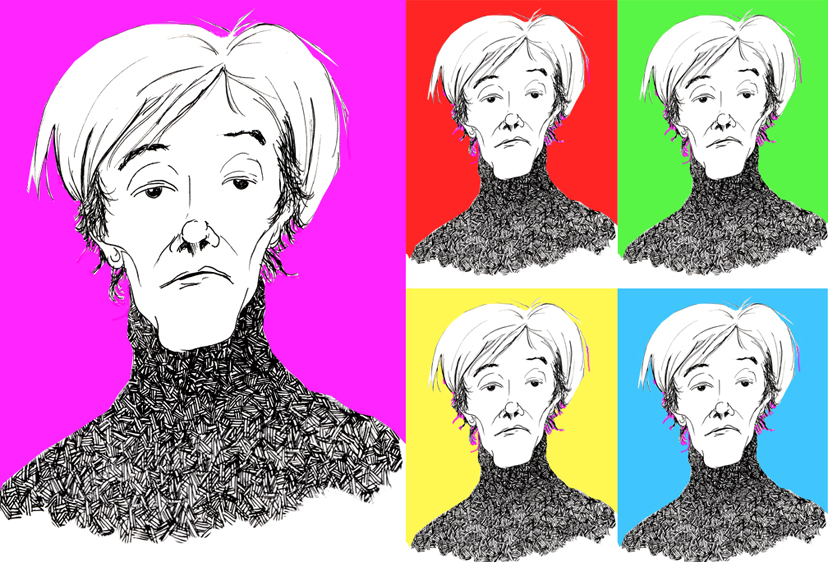 Andy Warhol fooled everyone. The iconic pioneer in pop art and experimental film was fully focused on one thing, and one thing only — making money. He took everyday objects  Campbell’s soup, flowers, knives, Coca-Cola, Brillo scouring pads  and forced the public to view them as art. He painted them as any artist would paint a portrait or a still life. He put them on display and said it was “art”, so it was. And he did it because he knew the public would buy what they were familiar with. Andy said this about his fascination with Coca-Cola:

“What’s great about this country is that America started the tradition where the richest consumers buy essentially the same things as the poorest. You can be watching TV and see Coca Cola, and you know that the President drinks Coca Cola, Liz Taylor drinks Coca Cola, and just think, you can drink Coca Cola, too. A coke is a coke and no amount of money can get you a better coke than the one the bum on the corner is drinking. All the cokes are the same and all the cokes are good. Liz Taylor knows it, the President knows it, the bum knows it, and you know it.”

In the 1970s, he painted commissioned portraits of rich celebrities, including Liza Minelli, Elizabeth Taylor, Michael Jackson and The Shah of Iran. Andy said of these portraits, “Making money is art, and working is art and good business is the best art.”

His controversial films  “Sleep” showing poet John Giorno sleeping for six hours and “Eat” consisting of a man (fellow artist Robert Indiana, creator of the famous LOVE statue)  eating a mushroom for 45 minutes  were early examples of “art films” and forerunners to performance artists. But, Andy’s goal was to stir up enough interest to entice people to view his films, and in turn, make more money.

Sure, Andy Warhol was a great innovator and forever changed the art world. But he also said, “An artist is somebody who produces things that people don’t need to have.”

Andy Warhol died in New York City on February 22, 1987. He had been making a good recovery from a routine gallbladder surgery when he died in his sleep from a sudden post-operative cardiac arrhythmia.