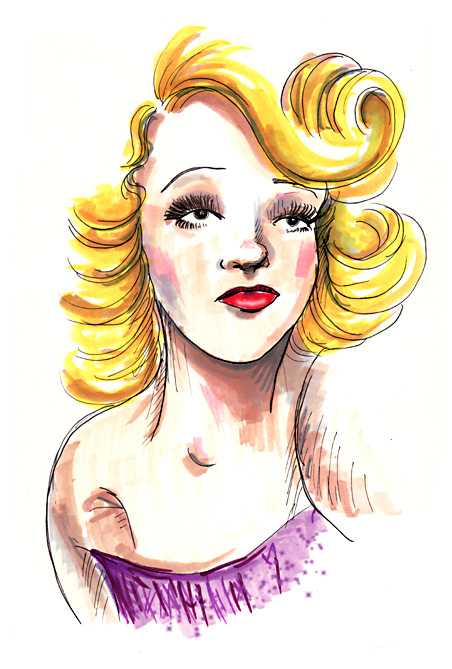 Marion Martin was born in Philadelphia and grew up going to private schools and living an entitled Main Line life of as the daughter of a Bethlehem Steel executive. In 1929, her family’s fortune was wiped out in the stock market crash. Twenty year-old Marion pursued a career in show business to help her family’s financial situation. Florenz Ziegfeld signed her to replace famed exotic dancer Gypsy Rose Lee in the Ziegfeld Follies  on Broadway. Her popularity led her to Hollywood where, after a few small, uncredited roles, she got her big break in James Whale‘s desert island adventure Sinners in Paradise  in 1938. Marion starred alongside the top names in Hollywood, such as Cary Grant, Rosalind Russell, Barbara Stanwyck, Lucille Ball and Clark Gable. She even had the back of her dress clipped out by Harpo Marx in the Marx Brothers’ 1941 retail romp The Big Store.  Although she found steady work throughout the 1930s and 40s, Marion was typecast as the one-dimensional brassy, buxom blond in countless films.

Not content with the roles she was offered, Marion retired from show business, became happily married and quietly devoted the rest of her life to charitable causes. Still expressing a desire to return to movies in the right role, Marion passed away in 1985 at the age of 76.