The Illustration Friday challenge word this week is “imperfect”. 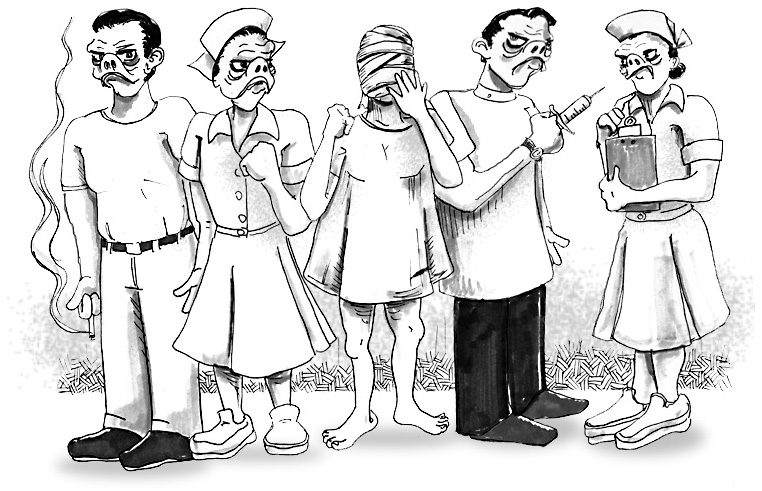 In November 1960, CBS broadcast an episode of the science-fiction anthology series Twilight Zone  called “Eye of the Beholder” (renamed “A Private World of Darkness” in subsequent rebroadcasts). It was a morality tale that forced viewers to reassess their concept of “perfect” and “imperfect”. The episode involves the final healing stages of an operation to make a woman’s looks more acceptable to society’s standards of beauty. The woman, whose face was concealed by a full covering of gauze bandages, converses with her doctor, hopeful for a positive result. The doctor, nurses and various background staff are all shown in shadow, although the episode is shot in such a way that it is not a focal point. At the story’s climax, it is revealed why the actors were filmed in that manner.

Ironically, in a segment dealing with society’s judgment of imperfection, the bandaged patient Janet Tyler was played by actress Donna Douglas, two years away from her career-defining role as critter-loving hottie Elly May Clampett on The Beverly Hillbillies.  However, Donna’s face wasn’t shown on camera until the final minutes of the episode. Janet Tyler’s sultry, resonant voice was provided by actress Maxine Stuart. The producers felt that Donna’s pronounced southern Louisiana drawl would not fit their character or the ominous tone of the story. While her pretty features were exactly what they were looking for, her voice was less than perfect.