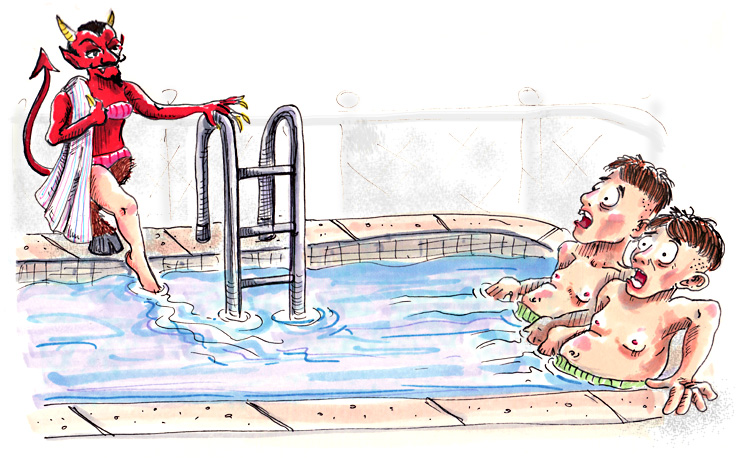 My son and I experienced Niagara Falls for the first time at the same  time. My wife, whose parents took their three children on numerous family vacations, saw the renowned natural spectacle in her youth. I went on my last furlough with my parents at the age of seven, and Atlantic City, New Jersey is severely lacking in the waterfall department. When I became a father, I was determined to travel with my own family as much as time and money would allow. They would need not be extravagant, cultural excursions  just good, old-fashioned family fun time. So, in the summer of 1993, the three-member Pincus family loaded our typically-domestic minivan with suitcases and snack foods and headed in the direction of our neighbors to the North.

Niagara Falls, in all its majestic aqueous glory, is truly breathtaking. However, after staring at an enormous wall of furiously rushing water, one’s sensibilities tend to shift from awestruck to bored to “I really have to go to the bathroom”. The Niagara Falls Chamber of Commerce is obviously aware of this emotional phenomenon. That has to be the reason that one of the most glorious displays of natural wonder and beauty is surrounded by kitschy souvenir shops, wax museums, arcades, miniature golf courses, spook houses, fast-food joints and budget motels. The average traveler might be turned-off by such vulgarity but this was right up the Pincus family’s alley.

Once past the brief, yet friendly, interrogation by the international border patrol, we crossed the Rainbow Bridge at Niagara Falls, New York and entered its bright and sparkly Canadian namesake on the other side of the Niagara River. As our son E. peered out of the backseat windows at the flashing lights and colorful building facades of frantic Clifton Hill, Mrs. Pincus navigated the Plymouth Voyager to the Quality Inn that would be our accommodations for several midsummer nights. We  pulled into the Victoria Avenue driveway of the Quality Inn and my wife let me out by the front office entrance to check in. The motel was standard, no-frills lodging consisting of a two-story, horseshoe-shaped structure encircling a small in-ground swimming pool surrounded by unassuming chaise lounges and enclosed by a chain-link fence. The rooms were nondescript and served their purpose in cleanliness, convenience and affordability.

Our first evening included a search for restaurant food that didn’t contain meat  evidently, a fairly difficult task in Canada. Afterwards, we strolled Clifton Hill, its surreal promenade alight with exuberance that spilled out of every open door and into the streets. E. was amazed and excited and we capped the night with a stop for ice cream before turning in. As we made our way back to our motel, we noticed a large group of Amish* teens  the boys in straw hats and dark vests with dark colored shirts; the girls in solid color dresses and starched white bonnets  heading in the same direction. As we walked, the population of the Amish youths steadily increased. When we reached the Quality Inn, the Pincus family proceeded to our first-floor room and the faction of Jakob Ammann‘s young disciples climbed the open-air staircase to the second story and retired to three adjoining rooms.

Our next day was spent doing all the activities that tourists at Niagara Falls do. We donned disposable rain gear for the the famous , yet drenching, Maid of the Mist boat ride. We retained our slickers for the equally waterlogged tour of the tunnels behind the Horseshoe Falls. We snapped photos along the guardrails protecting us from the hundred foot drop to the churning river below. Our whirlwind expedition sapped our collective energy, so we retreated to our motel for a rejuvenating dip in the pool. We hurriedly changed into swimming attire and started toward the small oasis in the middle of the parking lot. I laid claim to several recliners and accompanied my wife and son in the humble, water-filled cement tank. A few laps and splashes later, we were toweling off and relaxing.

Soon, two boys emerged from the second floor rooms where the Amish assembly had disappeared the night before. They joined the small congregation of hotel patrons at the pool and commenced to splashing and cavorting and doing the playful things boys do in a pool. While the usually sheltered youngsters amused themselves, two attractive, bikini-clad young ladies sauntered across the far end of the hotel property with their sights on the same midday refreshment the swimming pool offered their fellow guests. The girls idly chatted to each other as they dropped their towels on some chaise lounges on the opposite side of the pool and absentmindedly kicked off their sandals. The two Amish boys froze in mid-movement, their bodies rigid, their eyes transfixed. The young ladies, unaware that their every move was being observed and tracked by two innocent and bewildered 12 year-olds, continued their conversation. It was obvious that these two young men had never, ever, in their short lives, witnessed anything that remotely resembled the figures now on display before them. The female members of their traveling contingency sure as hell didn’t look like these… these…. females.  Suddenly, one of the girls rose from her seat and strode to the edge of the pool. The boys’ eyes widened. The young lady pointed her leg and slowly and precariously dipped her toe into the water. At the exact same pace, the two boys slowly and precariously backed out of the water, never once taking their gaze away from the girl. It was as though Satan himself had chosen this small, man-made body of water to cool off his cloven hoof. The girl lazily stirred the water around with her extended leg, then withdrew it and patted it with a towel   never once glancing in the boys’ direction. By the time the young girl returned to the seat by her friend, the two boys were, no doubt, on their knees in their room praying and repenting for whatever they had done to have been subjected to the Devil’s temptations.

Sometimes, vacations yield more sights that just the ones for the average tourist. And that works on several levels.

* For over fifty years, my wife’s family owned and operated a general merchandise store in a farmer’s market located in the heart of Pennsylvania’s Amish population, so we are well-acquainted with their practices, observances and attire.