The illustrationfriday.com challenge word this week is “similar”. 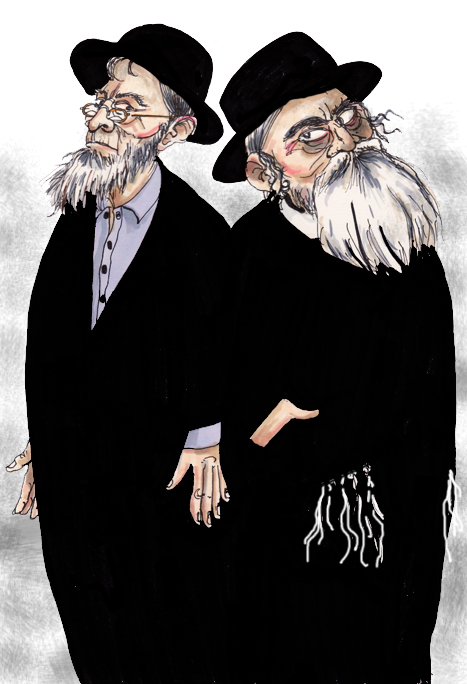 I grew up in the greater northeast end of Philadelphia, PA. If you traveled a few short miles north, you’d be out of the city limits. That doesn’t mean that I was anywhere near the Liberty Bell or streets that Ben Franklin once strolled down. No, I lived in an area that was about as suburban as you could get without being in the actual “suburbs”. My parents moved into this sheltered area about a year or so before I was born, so this was the only house I lived in until I lived in my own house with my wife.

I lived in a neighborhood in which we were one of maybe four Jewish families. Not that we were ultra-religious, but I experienced my share of anti-Semitism growing up. There were semi-regular taunts from neighbor kids who were most likely parroting their parents’ unfounded bigotry. Most of my friends lived on the other side of Roosevelt Boulevard in a predominantly Jewish neighborhood. Not that they were any more religious than me, but there was an obvious difference between their neighbors and mine. Our house stood out like a Hebrew sore thumb around Christmas. Most houses were wrapped from lawn to roof in colored lights and blow-mold Santas. Our darkened house displayed a sad little electric menorah in the window, patiently waiting for my brother or me to screw in another orange light bulb as the evenings of Chanukah progressed. While our gentile neighbors searched for dyed eggs at Easter, my family went about our business as usual, except my mom made chicken soup and there was a single box of matzo in the kitchen next to the bread.

When I got married, I was introduced to two worlds which I otherwise would have been unfamiliar.

Orthodox Jews and The Amish.

My wife comes from an observant and very traditional Jewish family. Her family keeps kosher. They have an elaborate and lengthy annual seder, the traditional Passover meal. For years, my father-in-law made his own gefilte fish. At Chanukah, my mother-in-law shreds piles of onions and potatoes to make “from-scratch” latkes. Every year at Purim, my in-law’s dining room table is an endless blanket of homemade hamataschen.

When I was the newest member of this family, I was taken on trips to the lower east side of Manhattan and Borough Park, a section of Brooklyn with a ubiquitous Orthodox Jewish population. I was witness to a surreal world of huddled black-clothed families, rushing to their destinations, most with six or seven children in tow. These people looked like aliens to me. The men wore heavy black coats and large black hats. The majority had long, unkempt beards and heavy curled locks of hair hanging in front of their ears. The women all wore long-sleeved ankle-length dresses. The male children looked and dressed like the men. The female children, like the women. The stores bore signs in both English and Hebrew – some in Hebrew only.

My in-laws also owned and operated a general merchandise business in Zern’s, a rural Pennsylvania farmers market. Zern’s is a typical farmers market, if there is such a thing as a typical farmers market. In a shopping adventure to Zern’s, one could purchase fresh vegetables, funnel cake, fasnachts and several different cuts of unusual meat or meat by-products. You may also haggle with some of the merchants over their unique handmade goods. It was here at Zern’s that I had my second bizarre encounter since emerging from the protective cocoon of northeast Philadelphia. It was here I saw Amish people for the first time. I saw huddled black-clothed families, rushing to their destinations, most with six or seven children in tow. These people looked like aliens to me. The men wore heavy black coats and large black hats. The majority had long, unkempt beards. The women all wore long-sleeved ankle-length dresses. The male children looked and dressed like the men. The female children, like the women.

The more I thought about it, the more I realized how similar Orthodox Jews and the Amish were. Even Peter Weir pointed it out in his 1985 film “Witness”.

They both are followers of a very conservative, very observant religious sect. Both groups are black clothing and facial hair obsessed. They both have rules about the use of electricity. They both are wary of outsiders infiltrating their territory and they think that if you are not one of them, you’re undesirable. Except for the mustache thing and the consuming of pork (and that bit about Jesus), they seem pretty similar.