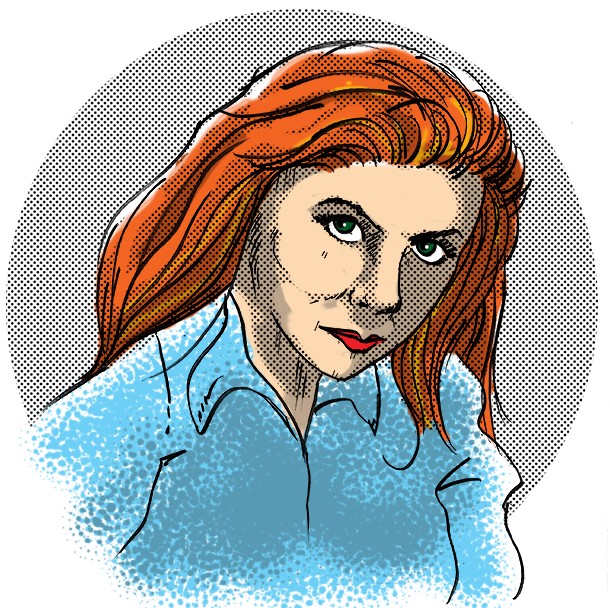 Kirsty MacColl couldn’t get a break. She wrote great, heartfelt songs that were humorous, biting, and, at times, achingly sad. She had a lovely voice tinged with a slightly smoky British accent. But, major success somehow eluded her.

After a brief stint as a singer in a punk band, Stiff Records signed Kirsty to a contract. Her debut solo single “They Don’t Know,” released in 1979, was a huge hit in the United Kingdom, peaking at #3 in terms of airplay. However, a distributors’ strike prevented the record getting to stores. The song consequently failed to appear on the official UK singles charts, which were based strictly on record sales. Kirsty felt her follow-up single was not getting her record label’s full support. She left Stiff Records and the single was pulled from the release schedule.

Kirsty signed to Polydor Records shortly after leaving Stiff. She had a UK hit with “There’s a Guy Works Down the Chip Shop Swears He’s Elvis.” In 1983, Polydor dropped her just as she had completed recording the songs for a planned second album. She returned to Stiff. She recorded a cover of Billy Bragg’s “A New England” in 1985 got to Number 7 in the UK charts. Meanwhile, comedian Tracey Ullman’s cover of “They Don’t Know” reached #2 in the US. Kirsty provided backing vocals on this version.

When Stiff went bankrupt in 1986, Kirsty was left with a recording contract. However, she was in demand as a backing vocalist, and she frequently sang on records produced by her husband, Steve Lillywhite, including tracks for The Smiths, Talking Heads, Big Country, Anni-Frid Lyngstad (Frida from ABBA), and The Wonder Stuff, among others.
In 1987, The Pogues recorded the alt-rock Christmas classic “Fairytale of New York,” originally conceived as a duet for Shane McGowan and bassist Cait O’Riordan. O’Riordan left the band before the song was completed. Producer Lillywhite asked his wife, Kirsty, to provide a guide vocal of the female part for a demo version of the song. The Pogues, however, liked Kristy’s contribution so much that they asked her to sing the part on the actual recording.

Kirsty was soon signed (and eventually dropped) by Virgin Records when Virgin was bought by EMI Records.
She divorced Lilywhite in 1994. ZTT Records released a ‘best of” collection of Kirsty’s songs, including a cover of Lou Reed’s “Perfect Day” as a duet with Lemonheads’ Evan Dando. Songwriter Kirsty was frustrated with the music business, with that fact that she was most famous for versions of other people’s songs, with repeatedly being dropped from labels and a lengthy case of writer’s block. She was ready to give up her music career and become an English teacher in South America.
Several trips to Cuba and Brazil restored Kirsty’s creativity. She released the Cuban and Latin-inspired “Tropical Brainstorm” in 2000 to critical acclaim. Kirsty learned how to speak Spanish with Cuban inflection (despite her British accent) for the album. “Tropical Brainstorm” yielded the hit “In These Shoes”. Kirsty was enjoying her first international success. A success she most definitely deserved.

Kirsty was devoted to her two sons — Louis and Jamie — and would spend long periods of time away from the spotlight to focus on raising them. After the successful release of “Tropical Brainstorm,” Kirsty took a much-need vacation to Cozumel with her partner, musician James Knight and her two sons. She intended to introduce her sons to scuba diving, an activity she loved. On December 18, 2000, she and her sons went diving in an area that was restricted to all watercraft. As the group was surfacing from a dive, a speeding powerboat, ignoring posted signs, entered the restricted area. Kirsty saw the boat right headed at them. Her son Jamie was in the boat’s path. Kirsty pushed him out of the way, but in doing so, she was hit head on and killed instantly.

Kirsty MacColl loved life, her family and her music and life just dealt her a shitty hand. Where’s the justice?