This week’s challenge word on the Illustration Friday website is “chicken”.  This is the first of three illustrations I’ve done for this word. Here  is the second and here  is the third, which I did over a year ago, but fits the theme. 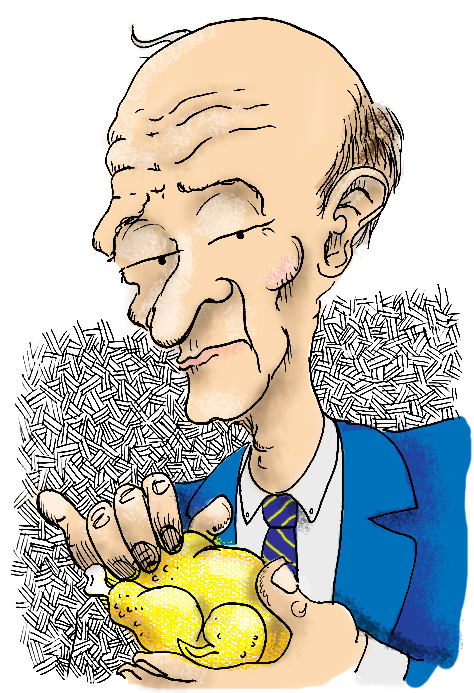 In 1920, a railroad worker named Arthur Perdue noticed that the farmers bringing eggs for shipping were taking in more money that their vegetable-growing counterparts. Arthur, along with his wife Pearl, purchased a small flock of chickens and built a coop in their Salisbury, Maryland backyard. Soon the Perdues were taking in an extra ten to twenty dollars a week from their new venture. That was a lot of money in the days of the Great Depression.

Although reluctant, son Frank put aside his dreams of becoming a professional baseball player and dropped out of college to become the third full-time employee in his parents’ egg business. They soon switched the direction of the business to raising chickens for meat rather than eggs. When meat prices began to rise during World War II, the Perdues earned a fortune and the business grew steadily. Frank became president of the company in 1952. He devised an idea to make the chicken more appealing to the consumer. He added marigold petals to the chicken feed, thus giving the chickens a more yellow appearance. Then he shipped his product on ice, rather than frozen like his competitors. This gave the chickens a fresher taste.

In the early 1970s, Frank approached an ad agency and produced a commercial in which he starred as spokesperson for his product. Prior to this, selling chicken under a ‘brand name” was unheard of in the industry. Frank was considered a branding visionary. Frank’s advertisements were wildly popular and, despite his shyness, he was featured in over 200 commercials over the next 23 years. The ad’s tag line  “It takes a tough man to make a tender chicken”  became known nationwide. Frank also made it clear to his customers that he welcomed criticism of his product and would happily give a refund to anyone unsatisfied with his chicken.

Frank had built his family business to a multi-billion dollar corporation.  Suffering from the beginnings of Parkinson’s disease, Frank turned the company’s reigns over to his son Jim in 1991. After a brief illness, Frank passed away in 2005.

In the 70s, my father’s humble beginnings as a butcher led to an executive position in the fresh meat and poultry division of a chain of local Philadelphia supermarkets. He had the opportunity to meet Frank Perdue. He described Mr. Perdue as a quiet, well-mannered man who, in person, looked like a chicken.