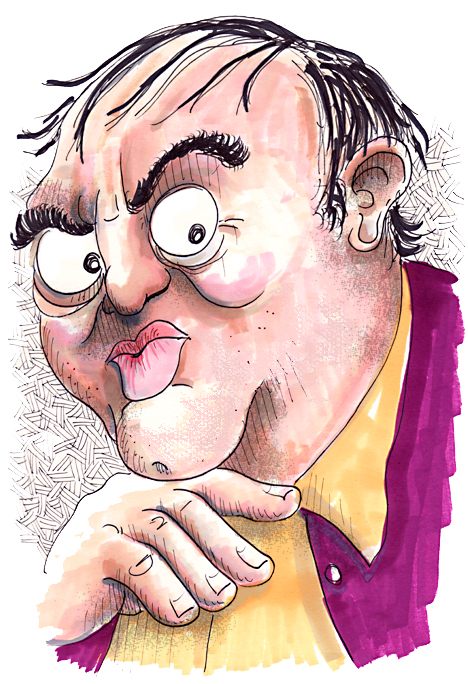 Brooklyn-born Samuel Mostel came from very humble beginnings, hoping to one day become an artist. After his graduation from City College of New York, when he took the same Beginner Art class over and over, he joined the Public Works of Art Project and began teaching art. He mixed his natural humor into his classes and was soon performing his brand of comedy for private parties, including gatherings at Labor Union Social Clubs. These performances would play a major role in his eventual blacklisting in the next decade.

In the early 1940s, Samuel landed a regular gig doing stand-up comedy at a small Manhattan nightclub. The club’s press agent dubbed him “Zero” saying he’s “a man who made something out of nothing. The name stuck and Zero’s blend of comedy and social commentary was a hit with audiences. He appeared in some off-Broadway plays and eventually had several programs on local New York television.

In the early 1950s, Zero was blacklisted for his alleged association with the Communist Party and his refusal to report on the activities of his colleagues. Unable to get work for years, theatrical agent Toby Cole, who strongly opposed blacklisting, offered Zero a role in his off-off-Broadway production of Ulysses. Zero received rave reviews and overwhelming praise and was awarded an Obie in 1958. That award led to the role of Pseudolus in the Broadway musical A Funny Thing Happened on the Way to The Forum.  Although Zero was a joy for audiences, directors and fellow actors had great difficulty working with him. He had a tendency to ad-lib at length thus throwing off the timing of live performances and confusing other cast members waiting for specific cues. Producers preferred to sign Zero to short contracts, as the longer he played a part, the more he would put his own spin on it. In 1964, Zero opened on Broadway in his memorable role as Tevye in Fiddler on the Roof,  for which he won a Tony Award. However, mostly likely due to his reputation, Zero was passed over in favor of Israeli actor Topol, by director Norman Jewison for the movie version of Fiddler. (Years later, when Zero’s son Josh was cast in the Jewison-directed Jesus Christ Superstar,  Zero joked “Watch it! He’s libel to cast Topol’s son instead.”)

In 1968, director Mel Brooks had to convince Zero to play Max Bialystock in his film The Producers.  The film, which garnered lukewarm reviews in its initial release, has since become a cult classic and possibly Zero’s most memorable role.

Zero appeared in several movies through the 60s and 70s, including the film version of A Funny Thing Happened…  and The Front,  a story of a blacklisted actor that eerily mirrored Zero’s own struggles. He also filmed short segments for Sesame Street  and The Electric Company  for public television. During rehearsals in Philadelphia for a reworking of The Merchant of Venice,  Zero collapsed in his dressing room and was taken to the hospital with a respiratory ailment. Over the next day or so, Zero complained of dizziness and lost consciousness. Doctors were unable to revive him. He was pronounced dead at the age of 62, the result of an aortic aneurysm. Zero had recently completed a guest role on The Muppet Show  and became the only guest in the show’s history to die before his appearance was broadcast. He enjoyed working with Jim Henson, noting “[Henson] has the best possible actors. If you have a disagreement with them, you can always use them to wash your car.”