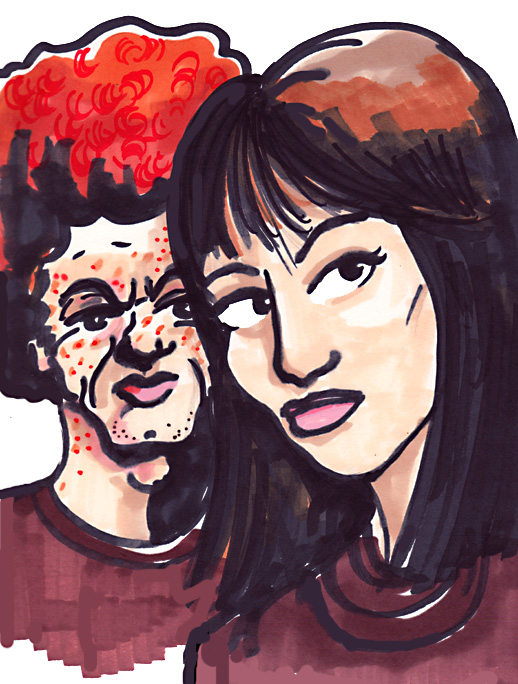 2010 came to a close last week, but it began almost 35 years ago, when I was in high school. After getting tossed out of the majority of my academic classes, I gravitated towards the art department. There, among those paint-splattered desks and rolls of brown kraft paper, I felt comfortable and had as much a sense of purpose as a 16 year-old could. It was in one of those art classrooms I met Eric Dorfman. My relationship with Eric could best be described as a cordial, but distrustful, rivalry. We weren’t so much friends as we “got along” – always aware of the underlying atmosphere of competition between us. Eric was a grade behind me, but freshmen through seniors were lumped together in art classes to make up for the lack of full enrollment. Of course, the first thing anyone noticed about Eric Dorfman was his huge shocking red “Jew-fro.” He was short of stature with broad shoulders and a perpetual look of “don’t fuck with me” on his freckled face. He had a fast and determined gait and maneuvered through the hallways with his head down, like a bull on a mission. We passionately discussed movies and music with teenage fervor, sometimes even sharing a few favorites, but more often we disagreed. We did, however, have a similar drawing style, although I remember his being more advanced and refined and not nearly as crude and sketchy as mine. (I like to think I got better.)

Eric and I were also rivals for Lisa Holtsberg. I dated a lot of girls in high school and, although she was sweet and I liked her, my main reason for dating Lisa was that Eric Dorfman pursued her, too. Over an undetermined period of time (read:  I cant remember), Lisa seemed attracted to each of us equally, unless she was just secretly enjoying being a witness to our animosity and the battle for her affection. Soon, I graduated from high school and I moved on, leaving Eric and Lisa (and many others) behind. Or so I thought.

While attending art school, I met the future Mrs. Pincus. When I first met her, as I related in a story told elsewhere on this blog, Mrs. P. was accompanied by her friend Ricci (pronounced “Ricky”, not like actress Christina’s last name). I became friends with Ricci and she would often be invited (or just join in) when Mrs. P. and I went out – and, honestly, I had no problem with that. I soon found out that Ricci had a long time, on-again off-again, somewhat tumultuous, relationship with none other than Eric Dorfman. Ricci talked about Eric constantly, although they seldom went out on dates. She hung out at his place a lot and she went out with us a lot, but rarely would those two activities merge. (In the nearly thirty years I have known my wife, I believe I saw Eric show his face in public with Ricci twice.) When Mrs. P. and I married, Ricci was Maid of Honor. When our son was born, we named Ricci his godmother. Eric eventually married someone who was not Ricci. Despite that, there remained a constant, though illicit, connection between the two of them.

During one of the “off-again” phases of the Ricci-Eric relationship, Ricci developed an unrequited crush on a local radio personality named Mark the Shark. Mark was the amiable half of the wacky 80s era Morning Zoo franchise in Philadelphia. The celebrated show was hosted by perennial pompous asshole John DeBella, a man whose talent and popularity I have yet to understand. In addition to the hourly news updates, the soft-spoken, easy-going Mark the Shark provided a modicum of civility in contrast to DeBella’s annoying antics and forced laughter. Ricci was enamored with Mark. During a live broadcast of the Zoo before an audience of which we were a part, Ricci gazed longingly at Mark for a marathon four hours. Ultimately, John DeBella was humiliated on the air by rival Howard Stern in his early days of syndication and the Morning Zoo fell out of fashion. Mark the Shark, now using his real name Mark Drucker, quietly became the unassuming entertainment reporter for an all-news radio station in Philadelphia. He also married Lisa Holtsberg.

One morning in 1997 at the ungodly hour of 3 AM, a ring from my bedside telephone shattered an otherwise deep sleep. A phone call at 3 AM is rarely a good thing and this one was no different. It was Ricci and she was hysterically crying. Through shrieking and gasps for breath, I was able to decipher her words – Eric Dorfman had committed suicide. He had been depressed over his separation from his wife and young daughter. His excessive self-medication was no longer effective and he shot himself. My wife and I were shocked. Ricci was devastated. A funeral followed shortly. I believe this marked the beginning of the end of my wife’s friendship with Ricci. As I had witnessed and correctly predicted, my wifes lengthy and strong friendship with Ricci came to a bitter end. Ricci had evolved into a different person – a person far removed from the fun-loving, spontaneous and occasionally happy Ricci we once knew. All in all, Ricci and Mrs. Pincus just grew apart and into different lives.

Early last year, my friend Sam passed away. I encountered several friends from my life a thousand years ago at his memorial service. Now older and somewhat wiser, we seemed to approach each other with warm familiarity and, under the circumstances, sad sentimentality. The cross conversations were peppered with promises of get-togethers and lunch dates and the obligatory exchange of email addresses and cell phone numbers. And as long as the cell phones were out, the display of digitally-captured photographs of absent children soon followed.

Over the course of the next several months, I had rekindled paused friendships from my younger days, culminating in an informal gathering at my friend (and Florida traveling companion) Alan’s home. On that July evening, we were joined by Scott Sadel (now an anesthesiologist) and Jon Wassermann (now a very huggy chiropractor) and our wives for a session of reminiscing among old friends and introduction, as our wives had not previously met. As the sky outside grew darker and several pizzas were reduced to gnawed crusts, the conversation bounced from recounting embarrassing episodes of youth to commiserating about our current employment to updates on our children and extended families. Of course, the inevitable round of “Jewish Geography” reared its yenta  head and soon previously unknown connections through summer camp and Jewish youth groups were revealed. Alan even broke out his slide projector for a pale and scratchy trip down Memory Lane. During the “who have you seen/who have you talked to” portion of the night, various forgotten names were bandied about – names that had not crossed our collective minds in decades. We briefly discussed the untimely 2005 death of Mark Drucker when Lisa Holtsberg’s name surfaced, and just as quickly moved on to the next old girlfriend or English teacher.

When autumn rolled around, a varied group of guests gathered at my house for a pre-Thanksgiving soiree. My new old friends Scott and Alan were unavailable to attend, but Jon and his missus excitedly joined us. With a houseful of people from various categories of my acquaintance, extended conversations are difficult. My wife is much more adept at mingling and spending time with all her guests, no matter how brief. I pick who I want to talk to and I pick who I want to avoid. While Jon was simultaneously devouring a cookie and admiring the unusual décor in our dining room, he offhandedly mentioned that Lisa Holtsberg had passed away in September. My eyes widened and I cocked my head in disbelief as I asked Jon to repeat what he just said, in case an errant chocolate chip had ricocheted off a vocal cord and impacted his words. Jons wife Marjie confirmed that I had not heard wrong. Mrs. Pincus was carrying a stack of paper plates laden with crumbs and I grabbed her arm as she walked by. I told her what Jon had told me, and although she had never met Lisa, I could tell she was saddened. Not just at the loss of someone so young, but because of the unusual reoccurring role Lisa played in our lives.

For most of our relationship, my wife has been intrigued by the fact that I avoid my past like the plague. Often, we would go to a mall or to a restaurant and I would single out a man noting that I had attended high school with him. “Are you going to say ‘Hello’ and ask how he’s been?,” she’d innocently inquire. I would always answer in the negative, adding that if I gave a shit about “how he’s been,” I would have kept in touch. My dear, dear wife – sweet, warm and friend to all – still finds this perplexing. Year after year, I have expressed no interest in the festivities of a high school reunion. The thought of reliving the dreadful memories (the ones I can remember) of my teen years turns my stomach. Catching up with ancient acquaintances I expect would be lying about post-high school accomplishments turns my stomach even more. Sure, I had friends in school – close ones – but it seemed as though that portion of my life happened to another person. However, 2010 seemed to have brought that person back.