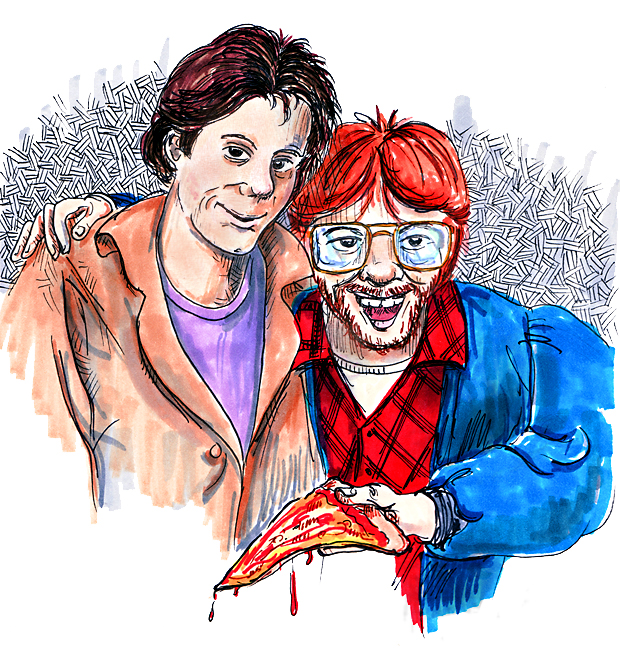 It was 1978. I sat behind the wheel of my mom’s ’69 Ford Galaxie trying out my newly acquired driver’s license. Sam sat on the passenger side of the huge vinyl bench seat. We talked as I maneuvered the Galaxie down Bustleton Avenue in northeast Philadelphia, when suddenly Sam screamed “What the fuck are you doing?” Panicked, I checked my speedometer, my gas gauge, my rear and side-view mirrors. “What am I doing? I’m driving! What?,” I answered. Sam shot me a look of disbelief and frantically pointed out the window, gesturing at a location somewhere behind us. “We could have gotten sex!, ” he said. “What? Where?,” I countered as I looked around. “Back there! Didn’t you see those two girls?,” Sam explained earnestly. While trying to pay attention to traffic signals, other cars and pedestrians, I vaguely remembered just passing two girls around our own age standing at a bus stop. I asked Sam if that was what he was referring to. He nodded “yes” and stuck his head out the window looking back at them. “One for me and one for you.”, he said. And he believed it. He believed all we needed to do was stop, introduce ourselves and these two young ladies would be having sex with us in a matter of seconds. That  was Sam.

My best friend, Alan, introduced me to Sam in high school. They had been friends since elementary school. The three of us were constant companions in our pursuit of American teenage goals. We hung out, listened to music and drove around – mostly for Sam to look for girls. Sam, Alan and I were at Oxford Valley Mall one afternoon, and soon, we went to Choo-Choo to get something to eat. We ordered a whole pizza to split for three of us. Unfortunately, an eight-slice pizza doesn’t divide evenly among three people. To avoid any complaining, we needed to purchase an extra piece for Sam.

Later in high school, we were all passing our driving tests and being awarded driver’s licenses. At the time, the legal drinking age in Pennsylvania was 21, but in neighboring New Jersey alcohol was readily available for those starting at age 18. And we took full advantage. Back in the days before the evils of driving while intoxicated were rammed repeatedly down everyone’s throat, Sam and I happily traveled the twenty-five minute trek to Kaminski’s Ale House in Cherry Hill, New Jersey. On a typical weekend evening, Sam and I (and other friends) would drink cheap beer by the pitcher until we were — I believe the proper term is “shit-faced”. Then, we would stagger to the car, crawl behind the wheel and navigate our way home as though it was the most natural thing to do. One night, after dropping Sam off at his house and watching him trip across his driveway, I drove the five minutes to my house. I dozed while I drove and woke up to find myself on the on-coming traffic-side of the yellow line. I merely corrected my steering and continued on my way.

When I was in grade school, I was paired with a girl named Harriet. It was as innocent as could be between ten-year olds and amounted to nothing. After high school, I finally asked Harriet out on our first real date. I picked her up at her house, which was just down the block from Sam’s house. Through the course of the evening, I discovered that Harriet and I had very little in common and I leaned towards bringing this date to a hasty end. I drove Harriet home and gallantly walked her to her door. She went inside as I headed back to my car. I slid behind the steering wheel and turned the key in the ignition. It wouldn’t start. I tried several times with the same disappointing result. I got out and saw Harriet had turned out the lights in her house. I looked up the street and saw the lights in Sam’s house were out, too. I walked several blocks to my friend Scott’s house, where luckily, he was home. After a brief explanation, Scott was able to drive me home. At 9 AM the next morning, my phone rang. It was Sam. “Jesus Christ!”, his voice blared out of my phone, “Did you spend the night at Harriet’s house?” Sam was leaving for school and passed my broken-down car. “No”, I reassured him. I also told him that my car would probably be there when he got home, since I was still arranging for a tow truck.

In 1980, Sam and I slept all night on the floor of his mother’s optician shop waiting for the ticket agent next door to open. We purchased tickets to see Bruce Springsteen’s Philadelphia stop on his promotional tour for his album “The River”.  Our fifteen-hour wait yielded shitty seats on the second level of the Philadelphia Spectrum. The night of the show, a patron behind us announced to our seating section that he intended to record the show on his hand-held tape recorder. He expressed his desire to have everyone remain silent during the concert. Sam rolled his eyes, turned around and emitted a piercing, siren-like whistle into the recorder’s microphone. Then, Sam leaned back and smiled. After the show, Sam and I hopped into my car, popped in a Springsteen 8-track tape and cranked up the volume. We were unaware that all news sources were reporting that John Lennon had been fatally shot earlier in the evening.

After college, Sam moved to California. He called me after he settled to give me his contact information. I asked him if he met anyone famous. He said, “Yeah. Jack Nicholson, Anjelica Huston, Michael J. Fox.” “Where did you meet them?,” I inquired. Sam emotionlessly replied, “I was in movies with them. I’m an actor now,” Of course he was, I thought. He had those teen idol-movie star looks. His film career was brief and fleeting and Sam moved to Phoenix and began a software company. Sam quietly developed the technology that became the AOL instant messenger “Buddy List.”

Over the years, Sam was hard to pin down. Several phone numbers had been disconnected and addresses changed. But Sam always found me and when we spoke it was as though no time had passed. Sam called me on my birthday in August 2009. He was living in Florida. Coincidentally, my family and I were headed for Florida the next day. We made sketchy plans but, sadly, no meeting took place. I heard from Sam next in February. My son and I were shoveling out of twenty inches of snow. I took a picture of the huge snow drifts and sent it by cellphone to Sam with the message “Look what you are missing.” He immediately replied “I guess it’s time for you to move to Florida.” That was the last contact I had with Sam.

Sam passed away on March 13.