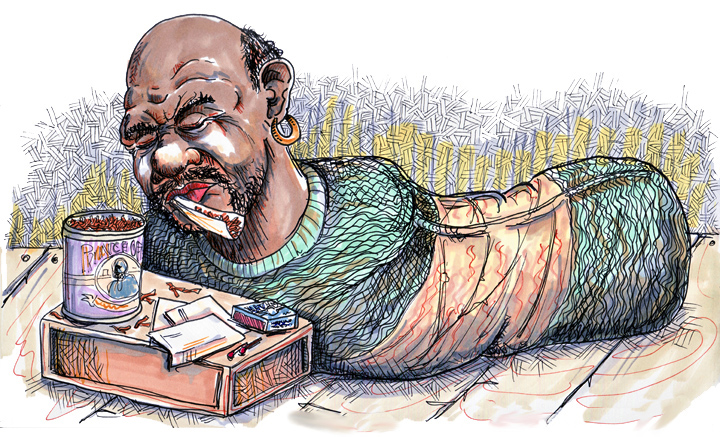 The remarkable Prince Randian was one of the most successful sideshow performers of the 1930s. He was brought from his native British Guyana to the United States by showman P.T. Barnum in 1889. Despite being born with no arms and no legs, Prince Randian demonstrated his ability to shave, write, paint and roll and light a cigarette with expert proficiency. He even kept his smoking materials in a wooden box that he built himself with a hammer and saw. He often joked that one day he would build a house himself.

Barnum billed Prince Randian as “The Human Caterpillar”, who slithers on his belly like a reptile. When he performed, Randian wore a knit sack-like garment that emphasized his distinctive limbless torso.

Randian appeared in the 1932 classic Freaks directed by Tod Browning. In a memorable scene, Randian lights a cigarette with a match. He then blows out the flame as he exhales his first puff. Although he spoke four languages fluently, his only line of dialogue is delivered with an incomprehensible accent. (He actually asks another able-bodied actor “Can you do anything with your eyebrows?”) Later in the film, he is seen gripping a dagger in his teeth while crawling through the mud with his colleagues.

Prince Randian was married to Princess Sarah, and had five children. Shortly after a performance at the 14th Street Museum in New York City, Prince Randian passed away in 1934 at the age of 63.