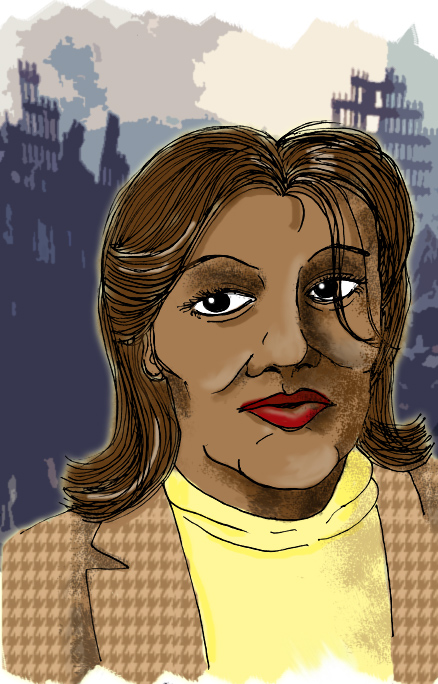 Dante Gaudio, an account executive at the New York Times, wished to offer help in a time of need. In the days following September 11, 2001, Gaudio posted fliers in the area of the decimated World Trade Center offering lodging to family members of the missing. He received a call from a distraught young woman. Gaudio told her his location and invited her over.

Soon after, Gaudio opened his door to a sad young woman. Although her passport said Sanae Zehovani, she identified herself as Sanae Zahani. She was 20-years old and had come to the United States from Casablanca, Morocco in July. She had been working in a dentists office in Baltimore, but came to New York City to look for her sister. Aneda (or Neda, as the young woman called her) worked for Cantor Fitzgerald, a global financial services firm whose headquarters were located in World Trade Center Tower One. Almost seven hundred employees of Cantor Fitzgerald were killed when a jet crashed into Tower One. Sanae’s 26-year old sister was one of them.

The compassionate Gaudio drove Sanae to the New York Family Assistance Center, which had been set up at Pier 94. to help locate those who were missing or had perished in the World Trade Center attack. At the Center, Sanae filed a missing persons report and gave DNA swabs from inside her cheeks. She visited the Cantor Fitzgerald booth, but they could find no record of Aneda Zahani in their employ. Sanae noted that her sister was once married and could have used the last name “Apollo.” So, they researched “Aneda Apollo,” but again came up empty. Sanae explained that she may have been using an alias because of the possibility she was in the country illegally.

Sanae offered additional details about her sister. She informed Gaudio that she remembered that Neda lived near a train station and a jewelry store in Hoboken, NJ. Although she could not remember the address, she was sure she could find the apartment. While Sanae told her story to the Hoboken Police, she suddenly fainted in the police station. She was taken to a nearby hospital where she was given intravenous fluids until she was strong enough to be discharged. Sanea and Gaudio briefly cruised several Hoboken neighborhoods, but nothing seemed familiar.

A few days later, Sanae received a call from someone who had information about Neda. The caller spoke an Arabic dialect that Sanae didn’t understand. Gaudio knew a Moroccan woman he thought could help translate. The return phone number was lost in the confusion, but Gaudios Moroccan friend offered to have Sanea stay with her for a while. Sanae told her new host of her strict upbringing and how her mother shielded her and her sister from boys in Morocco. That is why she came to the United States.

Meanwhile, Gaudio hired a detective to track down the billing address for a cellphone that Sanae had gotten for Neda. It led to a man in Queens. He gave Sanae the number of another man who may have been Neda’s boyfriend. She called him, and he wasn’t helpful. Then another call came. Sanae began shaking and sobbing. It was the woman she was staying with in Baltimore. She told Sanae that her sister was alive and okay. Later, Sanae told Gaudio that she had spoken with her sister. She had managed to escape from her office at the World Trade Center. She received treatment for some injuries, but she was fine and was now in Baltimore. Relieved, Sanae along with Gaudio and his friend had a joyous celebration dinner. Sanae announced she would be leaving for Baltimore on September 24. Gaudio offered her $160 for her trip, but she refused all but $20 of it. She left New York, though she never officially closed her missing person case with the police.

Barbara Stout, an interfaith minister and Good Samaritan, also offered temporary housing for Ground Zero volunteers and out-of-town police officers. At 2:30 in the morning of September 26, an upset and exhausted young woman came to Reverend Stout. It was Sanae Zahani. Sanea related the same story she told Gaudio, except in this version, her sister was still missing.

Stout got Sanae accommodations at the YWCA. She volunteered to help Stout at her relief facilities, now located in a tent at the South Street Seaport. Sanae became very popular, making friends among the other volunteers. Firefighters and police officers invited her out regularly. Everyone was inspired by her story and was anxious to help find her sister in any way they could. Sanea had a photograph of her sister that she showed to everyone, including representatives from Cantor Fitzgerald. No one recognized the woman in the picture.

A fellow volunteer took Sanae to see The Rosie O’Donnell Show  and during an “audience questions” segment, Sanea spoke about her quest to find her missing sister. The touching story brought the audience to tears. She turned down offers of money from well-wishers, saying her only wish was to find her sister. In the weeks that followed, Sanae openly wept at a private tour of Ground Zero. She attended a memorial service for victims of the attacks and was presented with a container of ashes from the fateful site, along with an American flag. Soon, she said she was ready to return to Morocco and a sheriff drove her to the airport.

A few weeks later, she appeared again at Reverend Stouts facility. She said her father had begun proceedings to collect compensation from Cantor Fitzgerald for the familys loss. She said her sister had a car that was at the World Trade Center, and they wanted to collect for that, too. Sanae said she was off to file for a death certificate. This change in demeanor seemed odd to Stout. It was a different Sanae than she had known, but she figured that her father had made a convincing argument for practicality.

The next day, an article appeared in the New York Times about people missing from the World Trade Center who were later found to be alive. Dante Gaudio was quoted in the article, recounting Sanae’s successful search for her sister. Reverend Stout read the newspaper story and was dumbfounded. And she wept. Sanae never returned to Stout’s facility, however she did call. Stout questioned Sanae about her sister. Sanae insisted that she never implied that her sister was alive. She gave Stout the phone number for the attorney who was handling the case against Cantor Fitzgerald – a number that Stout later called. A number that rang and rang and rang. Sanae also produced a Social Security number for her sister. It was later determined that number was fictitious. Through a little investigation, Stout uncovered Sanae’s mother in Morocco. Through broken French and with the aid of a translator, Mrs. Zahani informed Stout that she only had one daughter in the New York area. Her name was Sanaa, but she had not heard from her in several months. Mrs. Zahani knew of Aneda, but confirmed that she was not family. She believed Aneda was a friend of Sanaa’s.

The last time Sanae was seen, she was headed to Brooklyn, she claimed, to meet with a lawyer. She disappeared as mysteriously as she appeared.