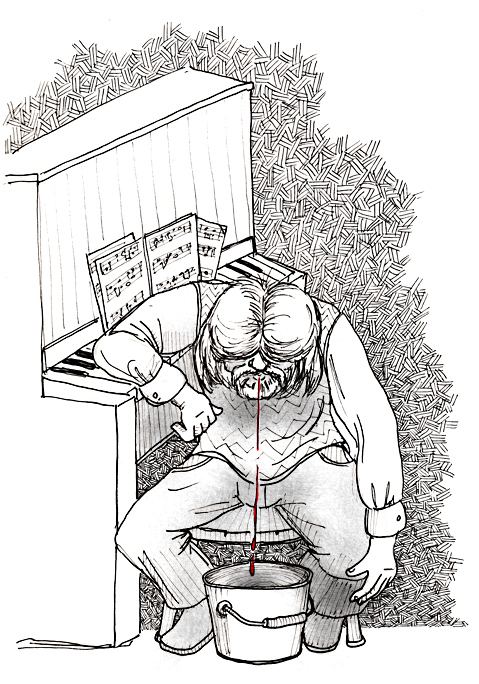 In the early 60s, Harry Nilsson pursued his song writing and singing career by day and maintained bank computers at night. He sold some songs and recorded some demos until a complement from Little Richard (“You sing good for a white boy!”) led to several records released under pseudonyms. None of Harry’s releases gained much critical attention, although his songs were being recorded by Glen Campbell, Fred Astaire, The Shangri-Las, The Yardbirds, and others. Despite his growing success, Harry remained on the night shift at the bank.

In 1966, Harry signed with RCA Records and released his first album for them, Pandemonium Shadow Show, in 1967. Music industry insiders, especially Beatles press agent Derek Taylor, were impressed both with the songwriting and with Harry’s multi-octave vocals. Taylor excitedly distributed copies of Harry’s album to his colleagues. After listening to Pandemonium Shadow Show  for thirty-six hours straight, John Lennon called Harry to give praise. Shortly after, Paul McCartney called to express his own pleasure. In an interview years later, Harry said he was disappointed that he didn’t receive similar calls from George or Ringo. With a major-label release, and continued songwriting success, Harry finally felt secure enough to quit his job with the bank.

Harry earned his first Grammy for his recording of Fred Neil‘s “Everybody’s Talkin'” from the soundtrack of the film Midnight Cowboy. Harry actually preferred that his song “I Guess the Lord Must Be in New York City” had been used as the movie’s theme. Offers began to come to Harry faster than ever. He was asked to write the theme to the sitcom The Courtship of Eddie’s Father. He reworked an earlier composition, “Girlfriend”, into the well-known “Best Friend” for the show. His songs were recorded by Three Dog Night and The Monkees, which led to a life-long friendship with drummer Micky Dolenz.

Harry’s next project was an animated film called The Point!  which included the hit “Me and My Arrow”. He followed that with Nilsson Schmilsson, an album that included the hits “Coconut”, “Jump into the Fire” and a cover of Badfinger‘s “Without You”, for which he won his second Grammy.

In the heat of the disco era, Harry released a collection of Tin Pan Alley standards that failed commercially. He moved to California and rekindled his friendship with John Lennon. John wished to produce Harry’s next album and the two began to hang out together, drinking heavily, using drugs and causing mayhem where ever they went. They were ejected from the Troubadour nightclub for heckling the Smothers Brothers. Harry and Lennon finally began their collaboration. During the sessions, Harry ruptured a vocal chord. Fearing Lennon would end the session if he found out, Harry hid a bucket under his piano which he would spit blood into out of Lennon’s sight.

Following several more commercially failed albums, Harry left RCA Records and moved to London to an apartment that he happily offered to friends in need of a place the unwind. Harry’s interests took him to the U.S. for extended periods. During one of those times, he offered his place to Mama Cass Elliot, who was playing at nearby venue. After her gig, she returned to Harry’s apartment and died of heart failure. Four years later, Harry’s friend, Who drummer Keith Moon overdosed and died in the apartment.

Harry dabbled in theater and film production, wrote film soundtracks (notably Robert Altman’s 1980 film Popeye ), and campaigned profusely for The Coalition to Stop Gun Violence, after the murder of his friend John Lennon. In 1990, he discovered that his long-time financial adviser had embezzled almost everything he had earned as a recording artist. Harry and his family were left with $300 and a mountain of debt.

On January 15, 1994, after finishing the recording of backing tracks for what he had hoped to be a comeback album, Harry died of heart failure. He was 52.