This week’s challenge word on Illustration Friday is “fast”. 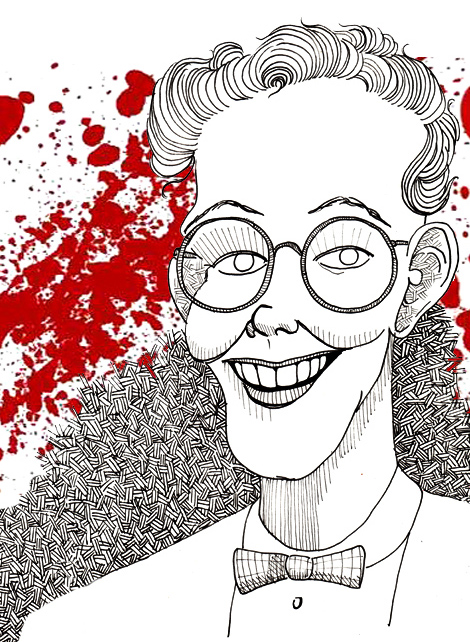 It all happened so fast.

Unruh was a decorated hero in World War II. He was an expert marksman and kept meticulous records of every enemy soldier he killed, right down to detailed descriptions of the corpses. After his honorable discharge from the military, the 28 year-old Unruh shared a small apartment with his mother, where his bedroom housed his huge collection of medals and firearms. He had difficulty finding employment and spent the majority of his time attending church services and engaging in target practice in his basement firing range.

Although he kept to himself, he became convinced that his neighbors were ridiculing him and plotting behind his back. Unruh became paranoid about his neighbors and kept a journal detailing every single thing that he thought was said about him. Next to some of the names he wrote the word “retaliate.”

On September 5, 1949, Unruh sat through a double feature three times and left the theater in the early hours of September 6, convinced that actress Barbara Stanwyck was one of his neighbors who was plotting against him. When he arrived home at 3 a.m., his gate that he had recently constructed was missing. Angered, he went inside his apartment and went to sleep.

He woke at 8 a.m., dressed in a suit and had breakfast with his mother before she left for work. At 9:20 a.m, he left his apartment with a loaded German Luger, and set out for the first stop on his list. He entered the shoe repair shop on his block, shot the cobbler twice and exited towards the barber shop. He silently entered the barber shop where six-year old Orris Smith sat on a white hobby-horse as owner Clark Hoover cut his hair. Unruh said, “I’ve got something for you, Clarkie.” and he fired two shots, killing Hoover and little Orris instantly. Unruh left the barbershop, sparing the lives of three other customers.

Back on the street, Uhruh shot a motorist who had slowed down to view the body of the insurance agent on the street. A neighbor, hearing the shots on the street, grabbed his own gun and fired at Unruh, grazing him as he entered the tailor shop. Once inside, Unruh shot the tailor’s newlywed wife and then left. Making his way back to his apartment, he shot two-year old Tommy Hamilton right through his front window as he watched Unruh walk by.

Sixty police officers surrounded Unruh’s apartment. After a brief standoff, tear gas forced Unruh out and into police custody. Once handcuffed, an officer asked Unruh, “Are you a psycho?” Unruh answered, “I’m no psycho. I have a good mind.”

Howard Unruh was determined to be mentally unfit to stand trial. He was diagnosed with paranoid schizophrenia and found to be hopelessly insane, making him immune to criminal prosecution. He was sent to the New Jersey Hospital for the Insane (now Trenton Psychiatric Hospital), to be installed into a bed in a private cell under maximum security. Unruh’s last public words were, “I’d have killed a thousand if I had bullets enough.”

Howard Unruh was transferred to a nursing home in 1993, where he died last Monday at the age of 88. He outlived the judge, the medical examiner, the psychiatrist, and nearly all the investigators from his case. He also outlived his youngest victim by eighty-six years.

Howard Unruh’s last public words, made during an interview with a psychologist, were, “I’d have killed a thousand if I had enough bullets.”