The illustrationfriday.com challenge word this week is “sugary”.
This could be a companion piece to my illustration for “yummy”. 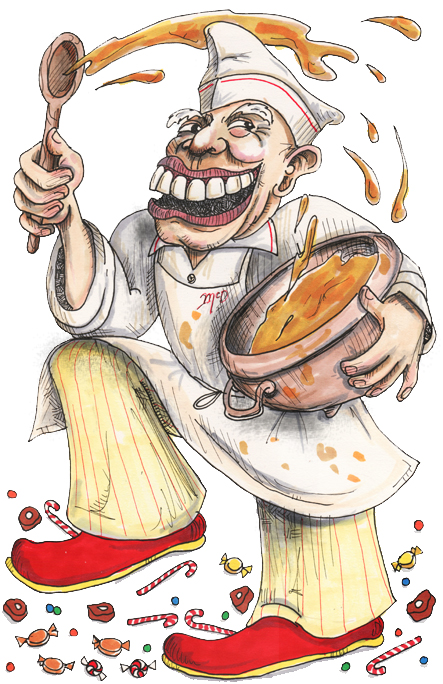 Here’s my original Tale of Swirly von Swirly deCocoa McDuff
Swirly von Swirly deCocoa McDuff
Made candy and gumdrops and sugary stuff
He mixed up ten pounds of peppermint sweets
And coconut tangerine crispy rice treats
Tray after tray of peanut fudge drops,
Hazelnut toffee and red lollipops.
Swirly von Swirly, he mixed and he stirred
Batch upon batch of sweet lemony curd,
Butterscotch cherry cashew rum brittle
Caramel chewies with cream in the middle
Those copper pots glistened,
Those pots of McDuff
Overflowing with chocolate
And marshmallow fluff
That Swirly von Swirly, he stirred and he mixed
Nonpareil candies all dotted with Trix!
He tried and he tested and experimentated
Shaken-up fizzy sticks (noncarbonated)
Clusters of almonds in a big creamy puff
All made by the Master —
deCocoa McDuff.

But wait! The story continues…. here!