The sugarfrostedgoodness.com current challenge is “yummy”.
For this uncharacteristically cheerful illustration, I took my inspiration from Dr. Seuss. 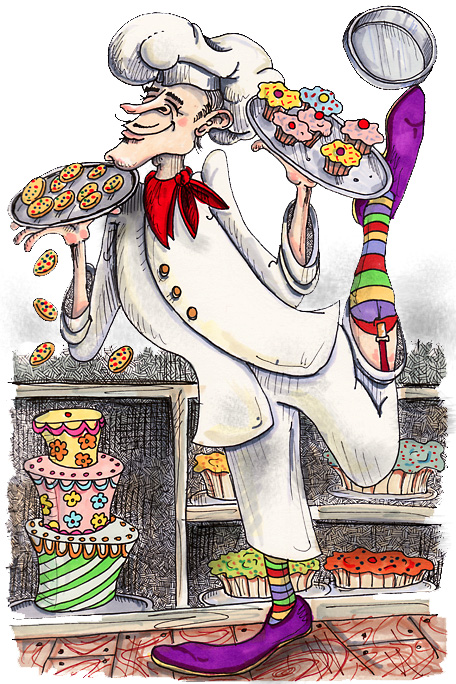 Here’s my original story of “Mister McBaker O’Frosting Moran”
Mister McBaker O’Frosting Moran
Baked one thousand cakes and used only one pan
He concocted pink cupcakes
And yellow and blue
But he used just one pan
Not seven or two
Giant red cream cakes with sprinkles on top
A big plate of chocolatey brownies and glop
Crunch cookies and fudgy yum yummies with fudge
Six batches of rum raisin spice cinnamon sludge
A great big enormous sweet stick-ity bun
And the pans that he used only numbered to one
He mixed in the eggs and the butter and flour
And the baking was done in just under an hour
Petit fours were presented by O’Frosting Moran
And ten dozen tea cakes — all using one pan
Cakes for a birthday
Cakes for a bris
Cakes for a Christening
with a cinnamon twist
How, you may ask, could he just use one pan?
’cause there’s magic in the kitchen
Of McBaker Moran