A while ago, I belonged and contributed to another illustration blog called Sugar Frosted Goodness. I had a sort-of “love-hate” relationship with the guy that ran the blog. He reprimanded me once for an illustration I did that he considered to “cross the line.” I always believed that nothing “crossed the line” as far as the message that art — any art — expresses. So, I resigned from that blog. Now, it appears, someone else owns his domain name and it is no longer an illustration blog. So, all’s well that ends well; what goes around, comes around; and fuck him.

Anyway, in 2008, I posted this illustration on that blog for the word “sugary.” The illustration and accompanying original poem garnered eleven praising comments. This week, Illustration Friday, an illustration blog to which I have contributed weekly for over ten years (without missing a week), posted the word “sugar.” I decided to do a follow-up to the story of toothy candy maker Swirly von Swirly deCocoa McDuff. 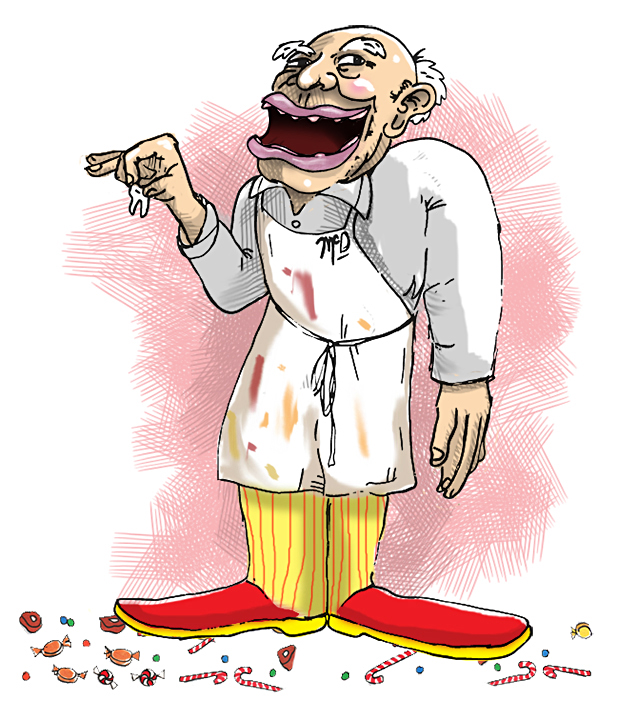 Swirly von Swirly deCocoa McDuff… revisted
Remember old Swirly von Swirly McDuff
Who concocted a kitchenfull of sugary stuff
He mixed up a whole mess of sticky-sweet snacks
Like praline pecan apple cinnamon jacks
And crunchy crunch peanutty caramel chews
Licorice whips in reds, greens, blacks and blues
Ol’ Swirly, he was quite the master of sweets
Filling his shelves with all sorts of fine treats
Renowned for his pineapple rum jelly pops
And marshmallow-y chocolate-y gumdrop-y drops
But Mr. deCocoa McDuff never heeded
Dental warnings he got, ’til his gums finally bleeded
And he lost all his teeth, his big pearly whites
So now, he’s got candy — but he no longer bites.