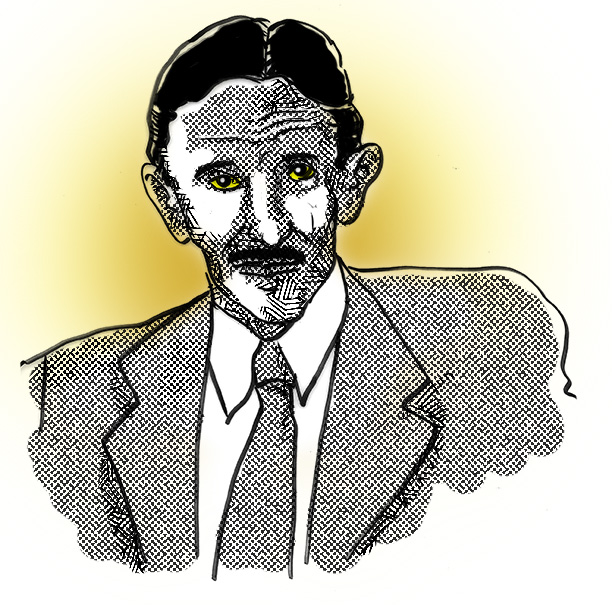 No doubt Nikola Tesla was a brilliant man. He was one of the world’s greatest electrical engineers. Aside from his work on electromagnetism and electromechanical engineering, Tesla contributed to the establishment of robotics, remote control, radar and computer science, and to the expansion of ballistics, nuclear physics, and theoretical physics. In 1943, the Supreme Court of the United States credited him as being the inventor of the radio. (Take that, Marconi!) And he spoke eight languages. But…

Tesla suffered from obsessive-compulsive disorder, and had many unusual quirks and phobias. He did things in threes. He was adamant about staying in a hotel room with a number divisible by three. Tesla was physically revolted by jewelry, notably pearl earrings. He was fastidious about cleanliness and hygiene, and was by all accounts germophobic. He greatly disliked touching human hair other than his own. He disliked touching round objects.

He was obsessed with pigeons, ordering special seeds for the pigeons he fed in Central Park and even bringing some into his hotel room with him. Tesla was an animal-lover, often reflecting contentedly about a childhood cat.

Tesla was a loner and was soft-spoken. However, he displayed the occasional cruel streak. He openly expressed his disgust for overweight people, once firing a secretary because of her weight. He was quick to criticize others’ clothing as well, demanding a subordinate to go home and change her dress on several occasions.

Tesla died of heart failure alone in room 3327 of the New Yorker Hotel, some time between the evening of January 5 and the morning of January 8, 1943, at the age of 86. Despite having sold his AC electricity patents, Tesla was destitute and died with significant debts.

Oh, he was mad, alright