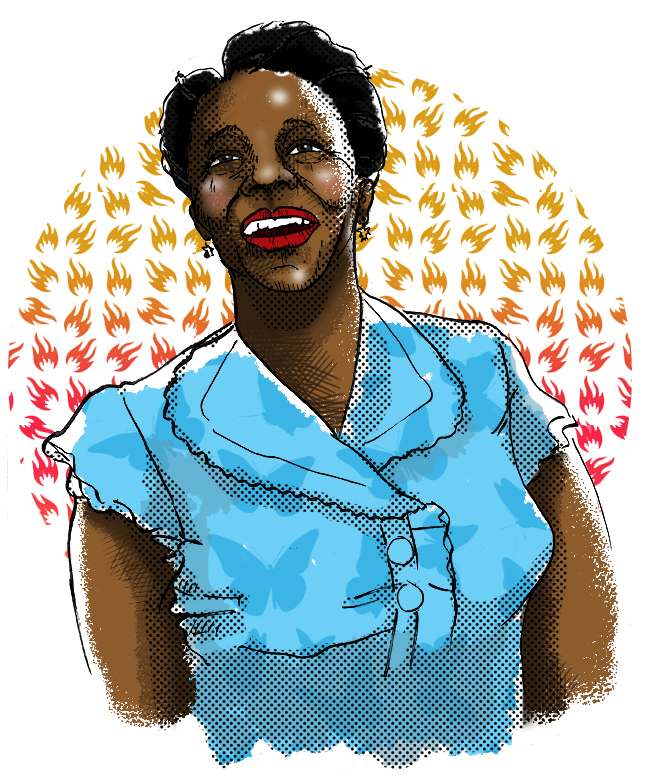 Thelma McQueen was born in Tampa, Florida in 1911. She trained as a dancer and took her stage name from the “Butterfly Dance” after performing it in a production of A Midsummer Night’s Dream. She never liked the name “Thelma” and legally changed her name to “Butterfly.”

Although she appeared in an uncredited role in 1939’s “The Women,” Butterfly made her official debut in what would become her most identifiable role — “Prissy,” Scarlett O’Hara’s house slave in the epic Gone with the Wind, uttering the famous words: “I don’t know nothin’ ’bout birthin’ babies!” She also played “Butterfly,” Mary Livingstone’s maid in the Jack Benny radio program, for a time during World War II.

By 1947 she had grown tired of the ethnic stereotypes she was required to play and ended her film career.

In 1950, anxious to work with her Gone with the Wind co-star Hattie McDaniel, she reluctantly took another racially-stereotyped role on the television series Beulah. She remained with McDaniel and the show for two years.

In a 1969, she appeared on an episode of The Dating Game.

Refusing to take any more racially-stereotyped roles, Butterfly was approached with very few acting offers. She devoted herself, instead, to other pursuits including furthering her education, and received a bachelor’s degree in political science in 1975 at the age of 64. In 1979, Butterfly won a Daytime Emmy award for her performance as “Aunt Thelma,” a fairy godmother in the ABC After School Special, Seven Wishes of a Rich Kid. She appeared in 1986’s The Mosquito Coast with Harrison Ford. Her final role was in a TV remake of Pollyanna (called Polly) with the Cosby Show’s Keshia Knight Pulliam. (Use that in your next game of Six Degrees of Kevin Bacon.)

In 1980, she sued Greyhound Bus Lines when she was assaulted in a bus station by a guard who thought she was a pickpocket. The 69 year-old Butterfly had several of her ribs damaged when the guard threw her into a bench. After several years of litigation, she was awarded $60,000.

Butterfly lived in New York in the summer months and in Augusta, Georgia in the winter. She died in Augusta as a result of burns received when a kerosene heater she was attempting to light malfunctioned and burst into flames. A lifelong atheist (and outspoken about her beliefs), she left the contents of her personal bank account to the Freedom From Religion Foundation and donated her body to medical science.

In an interview just before she died, Butterfly said, “Now I am happy I did Gone with the Wind. I wasn’t when I was 28, but now it’s part of black history.”