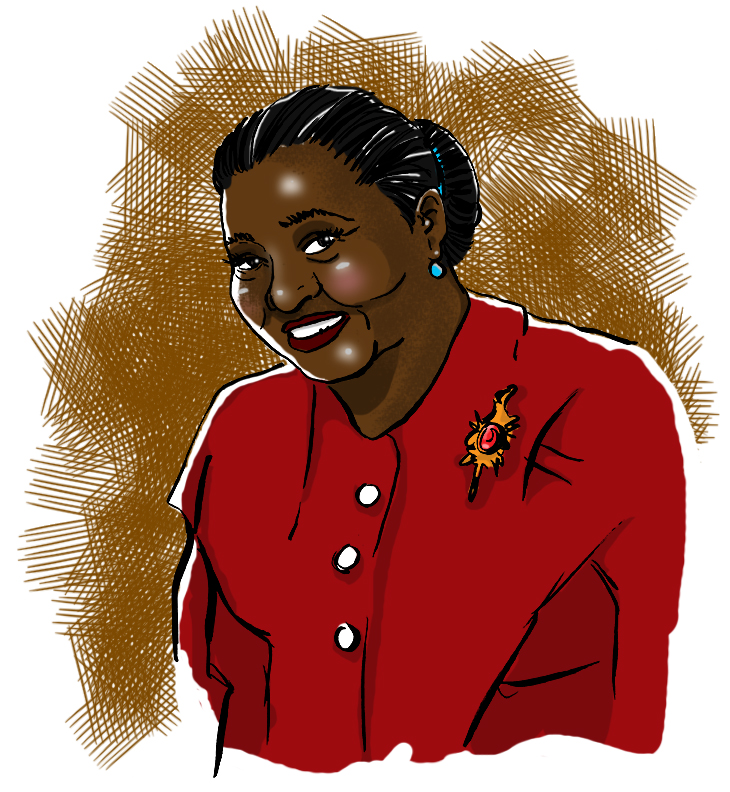 After a successful beginning as an actress, singer and songwriter with her brother’s minstrel show, she toured with the Melody Hounds, a singing group. A radio performance by The Melody Hounds led to Hattie making a number of recording for Okeh Records, a label with a predominately African-American roster. Of the many tracks she recorded, only four were issued.

After the stock market crash in 1929, Hattie could only find work as a washroom attendant and waitress at Club Madrid in Milwaukee. Despite the owner’s reluctance to let her perform, she was eventually allowed to take the stage and soon became a regular attraction. Shortly afterwards, she moved to Los Angeles with her brother Sam and her sister Etta, also aspiring actors. One of her first show biz jobs upon her arrival in Los Angeles was on a radio show performing as “Hi-Hat Hattie,” a bossy maid who often “forgets her place.” The show was a hit, but Hattie’s salary was so low that she had to continue working as a maid.

Beginning with The Golden West in 1932, Hattie was featured in over 300 film roles, most of which were uncredited. The majority of Hattie’s film roles were portrayals of feisty and outspoken maids. She (mostly) received praise for her performances, although she was chastised by Southern audiences for upstaging star Katherine Hepburn in 1935’s Alice Adams. Through her connections in show business, she became friends with such noted actors as Joan Crawford, Tallulah Bankhead, Bette Davis, Shirley Temple, Henry Fonda and Ronald Reagan.

Hattie’s most famous role was, undoubtedly, that of “Mammy,” the stern, but loving, maid (NOTE: This piece was originally written in 2017, before I was better educated. I have a better understanding of the depictions in Gone With the Wind and I fully acknowledge that Hattie’s character was a slave, not a maid. I do not wish to white-wash the truth. – JPiC) in David O. Selznick’s 1939 epic Gone With The Wind. First Lady Eleanor Roosevelt wrote to Selznick to ask that her own maid, Elizabeth McDuffie, be given the part. Clark Gable, who was cast as the rakish Rhett Butler, recommend Hattie for the role, despite her mostly comic leanings. She showed up for the audition in an authentic maid’s costume and won Selznick over. When the film’s gala premiere was planned for Atlanta, Hattie was barred from the ceremony because of strict Southern segregation rules. Clark Gable threatened to boycott the event until a tearful Hattie convinced him to attend. Later in the year, Hattie was separated from the rest of the cast at the Academy Awards, although she was joined at her table by her agent, William Meiklejohn, who was white. Hattie’s name was announced as the winner of the Best Supporting Actress Award, the first Oscar ever won by an African-American. A gracious Hattie delivered a heartfelt acceptance speech, proclaiming it “one of the happiest moments of my life” and thanking everyone who had a part in selecting her for the award and for their kindness.

Despite criticism by civil rights leaders, Hattie continued to play maids and domestics. She took over the television role of “Beulah” when Ethel Waters left the series. The show was a big hit and Hattie thrived until she became too ill to perform. The role was then taken by Louise Beavers.

Hattie was diagnosed with breast cancer and passed away at the age of 57 in 1952. She requested to be buried “in a white casket, a white shroud with white gardenias in her hair.” She asked to be interred at Hollywood Cemetery, but, unfortunately, she was refused as they practiced racial segregation. Hattie was buried at Angelus-Rosedale Cemetery in Los Angeles.

In 1999, the new owners of the Hollywood Cemetery offered to have Hattie’s remains re-interred there. Her family declined the offer. Instead, Hollywood Forever Cemetery (as it was renamed) built a large cenotaph on the lawn overlooking its lake. It is one of Hollywood’s most popular tourist attractions.