Through talks with peasants and visits to small villages, Jacob and Wilhelm Grimm collected some of the most gruesome, frightening and disturbing stories and published them in several volumes for children. Originally published in the early nineteenth century, these stories were watered down and homogenized over years of retelling. But in their original form, these tales of fairies and princesses and elves and animals included episodes of cannibalism, incest, murder, torture, arson, marital infidelity and racism. 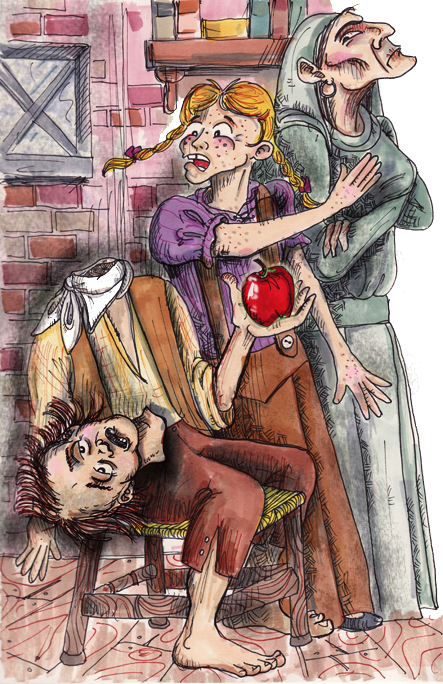 The story of “The Juniper Tree” tells of a man whose wife gives gives birth to a boy, then she promptly dies of happiness. After a brief grieving period, the man remarries and wife number two gives birth to a girl. The new wife loves her daughter, but fears the family’s fortune will go to her stepson when her husband dies. She wishes her daughter will get the inheritance and she develops a hatred for the boy. Stepmom gets an idea.

One day, the daughter comes home from school and asks Mom for an apple. Mom says “You may have one after your brother has one” and she sends the daughter out of the house. The stepson comes home and Mom offers him an apple from a large wooden chest. She opens the heavy wooden lid and, when the boy reaches in to take an apple, she drops the lid and cuts the boy’s head off. She doesn’t want to get caught, so she sits the boy’s body in a chair, sets an apple in his hand. Then, she ties a white scarf around his neck and sets the severed head on top, concealing the wound. Mom goes into another room and the daughter comes running in screaming that her brother is sitting in a chair with an apple. When she asked for the apple he said nothing. Mom suggests that she ask again and if she still gets no response, she should smack him on the head. The daughter goes back, asks her brother about the apple and smacks him — and knocks his head to the floor. She screams in horror. Mom blames the daughter for killing her brother. Mom then tells her she has a plan to cover up the murder.

I’d like to pause for a moment to remind you that this is a story intended for children.

Mom cuts the boy’s corpse up into little pieces and cooks him in a stew. The daughter cries during the entire process, even crying over the stew pot. Her tears fall into the stew, so it needs no salt. (I am NOT making this up!)

When Dad gets home from a hard day of whatever Dad does, they feed him the stew. Dad loves the stew, saying it is the best he’s ever tasted. As he’s eating, he picks out the bones and tosses them under the table. The daughter gathers the bones in a scarf and carries them outside, all the while crying tears of blood. She digs a hole and buries the bones under the juniper tree in the front yard. Suddenly, flames burst from the hole and a beautiful bird flies out. The bird flies around town, gathering specific items — a gold chain, a pair of shoes and a heavy millstone. The bird flies back and drops the gold chain around the father’s neck. Dad is pleased with his gift. The bird drops the shoes to the daughter. Then the bird drops the stone on the stepmom’s head and kills her.

The bird turns back into the boy.

Dad, Sis and boy all live happily ever after.