In doing research for this challenge, I read quite a few of the tales collected by The Brothers Grimm. I really enjoyed some of the more obscure and abstract stories, specifically “The Mouse, The Bird and The Sausage.” 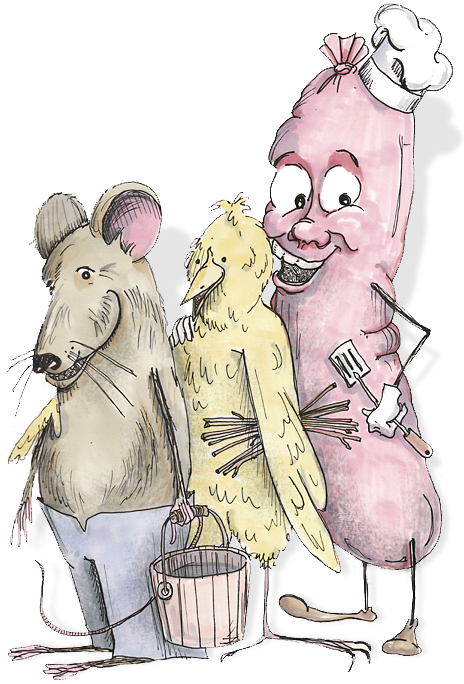 Once upon a time a Mouse, a Bird and a Sausage lived together in a single house. They were good friends and got along well. Each had a specific job. Mouse gathered water. Bird gathered wood for the fire. Sausage did the cooking. Every day, the Mouse would go to the well and come back with a bucket filled with water. Bird would fly to the forest and return with a bundle of sticks. Once at home, Bird would start a fire for cooking. Sausage would jump into the cook pot and slide around to grease the pot. He would slide around between the vegetables and meat and noodles until the pot was good and greased for cooking.
One day Bird flew out to the forest to gather wood and he met another bird. The two birds started talking about their lives. The other bird convinced Bird that his friends, Mouse and Sausage, were taking advantage of him. He said they were making Bird do all the difficult work, while all they did was get water and cook.
Bird flew home. He told his friends he felt they should all switch jobs. So, the next day, Sausage went out to the woods to gather wood. While he was gathering, a dog came up behind Sausage and gobbled him up.
Bird and Mouse were left. Just the two of them.
Mouse began to do the cooking. He remembered watching Sausage prepare meals. Mouse jumped into the cook pot to grease it up. The pot was extremely hot. Mouse’ s hair and skin were scalded off and he died. Bird panicked and began looking for Mouse. In his search, Bird threw pieces of flaming wood around the house. The house caught fire. Bird flew out to get water to extinguish the flames. He flew over the well and dropped the bucket in. But the bucket was too heavy for Bird. He was pulled down into the well and drowned.
Sweet dreams, kiddo!