The current challenge word on sugarfrostedgoodness.com is “mischief”. 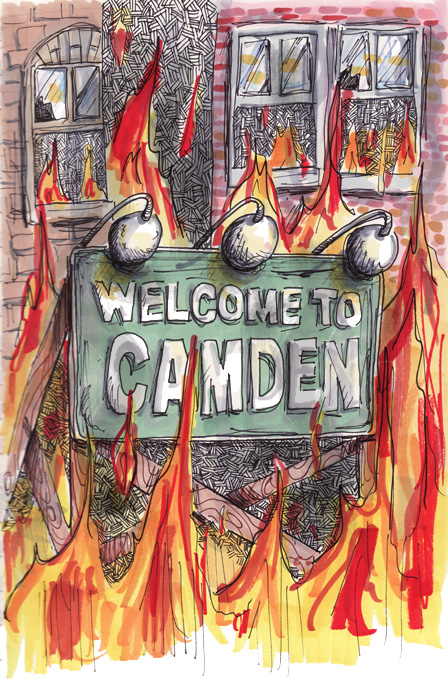 In Northeast Philadelphia where I grew up, as in most places thoughout the United States, the night before Hallowe’en was recognized as “Mischief Night”. In the 1960s, the time in which I grew up, the so-called mischief was usually of the “prank” variety and, for the most part, harmless. At sundown on October 30, some neighborhood kids would mark up car windows with a bar of soap. They would toss an egg or two at a random house. They may unload a battery of toilet paper on a neighbor’s tree, entwining its autumn-bare branches in yards of Charmin.

One year, my brother sat in the darkness of our yard, poised with the garden hose in his hand, waiting patiently and silently for those young vandals. A group of kids approached my dad’s Dodge Dart and my brother let loose his deluge. The kids scattered. I don’t remember our house being a victim for years after.

While innocuous hijinks were the norm in my neighborhood, across the Delaware River in Camden, New Jersey, it was a different story. Beginning in the late 60s, things in Camden started to deteriorate. The Camden Fire Department started getting numerous false alarms and calls for trash fires. The seventies ushered in a period of significant civil unrest in Camden. The situation got dangerous for firefighters; people started throwing rocks and bottles at firefighters and their apparatus. This period of dangerous, at times riotous behavior spilled over into Mischief Night, which evolved into a much more destructive annual event. Every October 30th, hoodlums would do their very best to burn the city of Camden to the ground. Over 130 arsons were committed in Camden on the night of October 30, 1991. The next year, Camden started emptying the streets of potential troublemakers, busing thousands of teenagers to Halloween events outside the city. Camden officials also organized a massive police and fire presence, which along with a stricter-than-usual curfew, has helped tame Mischief Night.