The illustrationfriday.com challenge word this week is “poof”. 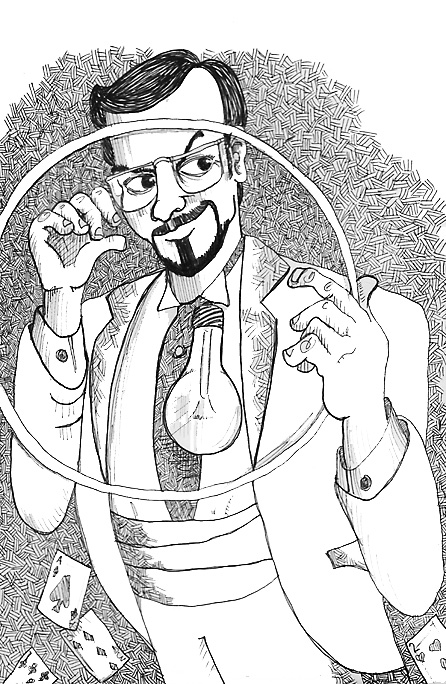 I have always loved magicians. My mom introduced me to magicians when we watched Tony Curtis’ totally inaccurate portrayal of Harry Houdini in 1953’s “Houdini”. When I was a kid, on every “Ed Sullivan Show” on Sunday night  between a performance by Vikki Carr and Morty Gunty  there was usually a magician. Long before David Kotkin made the Statue of Liberty disappear or Christopher Sarantakos walked across the surface of a Las Vegas swimming pool, there was Blackstone.
Harry Blackstone Jr. was a great TV magician. He was a staple on TV variety shows throughout the 1970s. Unfortunately, if you are younger that 30, you probably don’t remember him. He followed in his father’s footsteps and became a greater and more popular showman. He was a personable character with great audience rapport and a devilish sense of humor. His tricks weren’t spectacular, his act, however, was.
He was my dad’s favorite magician. One of Blackstone’s signature illusions was making a birdcage disappear while it was being held by three guys from the audience. He also selected gentlemen from the audience to assist in a trick involving a length of rope. He would always choose an elderly gentlemen and after a brief explanation, Blackstone would place his face an inch from the old man’s face and scream, “WE’RE GONNA DO A ROPE TRICK!” My dad would roar with laughter.
In 1985, on the 100th anniversary of his father’s birth, Harry Blackstone, Jr. donated to the Smithsonian Institution the original floating light bulb  designed and built by Thomas Edison. This was the first ever donation accepted by the Smithsonian in the field of magic.
He infamously performed during the half-time show at the 1987 Orange Bowl, in which four of the five tricks Blackstone attempted failed miserably due to missed cues and poorly designed props.
He also created four magic kits, from beginner to advanced, which were the best sellers at their time.
Blacktone died in 1997 due to complications arising from pancreatic cancer.
My wife always says that magicians on TV are ridiculous. I certainly understand that most things on TV are bullshit. And magic is bullshit. So, the two together equals double the bullshit. But I still find magic entertaining. Sure, it’s cooler seeing  magicians in person, but I’ll take it where I can get it.