The Monday Artday challenge word this week is “summer”. 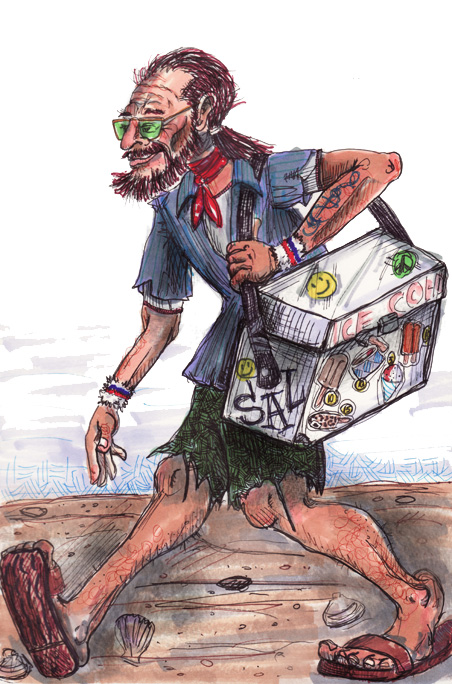 I love summer. I was born in the summer. I wait all winter for summer to come. I dislike the snow and the cold weather. Summer has always meant warm weather and vacations.

Elsewhere on my blog, I have talked about going to pre-casino Atlantic City when I was a kid. Part of my family’s ritual of going “down the shore” (as they say in Philadelphia) was a trip to the beach. The beach in Atlantic City is one of the last free beaches at the Jersey shore. By “free”, I mean that most other beaches require bathers to purchase a beach tag for admission. Beach tags are a small pinback button-like deal and are sold at the municipality’s City Hall for full season admission or by lifeguards at the beach for a daily pass. The money collected for beach tags usually goes toward maintaining a clean and safe beach experience. The beaches within the Atlantic City limits remain free of charge and it shows. The casinos glitter and sparkle on the famed Boardwalk. Just a few feet away, you’ll find one of the dirtiest beaches you’ve even seen.

It was different in the mid-1960s. I played in the sand. I built sand castles. I threw sand at my brother. My brother threw sand at me. My mom drank her world-famous iced tea from a big orange Thermos jug. My dad went into the ocean in his usual costume of a short-sleeve, button-down shirt, sunglasses and a cigarette.

One of the high points of a ’60s beach day was waiting for the ice cream guy. As soon as the blanket was spread and the umbrella was set up, I begged my mom for some coins. Although I was playing, I kept one eye open and one ear cocked for the ice cream man’s call. Every summer, we saw the same guys  Sal, Chas and Leo. They were three guys, looking back now, from which one wouldn’t dare dream of purchasing a food product. They were weathered and tanned with skin that resembled a well-worn catcher’s mitt. They dressed in sun-faded, torn and stitched ragged clothing. Some wore beat-up sandals on their filthy and calloused feet. Some just wore their filthy feet. It was 1967, so each sported long, unkempt hair – usually tied back in a ponytail – and a beard in desperate need of a trim. With the support of a duct taped nylon strap, they toted a huge, white cooler. It was covered with dents on the outside and filled with dry ice and frozen confections. You could hear them approach with their calls of “Fudgy Wudgy HEEEE-AHH!” A Fudgy Wudgy was a rocket shaped Fudgsicle with an extremely-fake, laboratory version of banana flavored stripe around the middle. There were also twin popsicles and tri-flavor dixie cups (with a little wooden paddle that served as a spoon). My mom always got a Good Humor Chocolate Eclair – vanilla ice cream on a stick coated with tiny bits of vanilla and chocolate cake crunchies. I remember loving the ice cream buying experience, but not the ice cream itself. The products were so rock-hard, frozen solid that taste was nonexistent. They melted in the hot summer sun, but the ice cream still had a flavor reminiscent of stainless steel.

I continued to go to Atlantic City as a teenager. In the late 1970s, my friends and I would descend upon Betty’s Rooming House for several beer-soaked weekends every summer. By day, when we weren’t drinking, we would head to the beach to watch girls, but usually ended up throwing sand at each other. But, still, we always bought ice cream. Still from Sal or Chas or Leo, now several years older and looking it.

My son just reminded me that my wife bought ice cream for him as a child, in the early 1990s – from Sal or Chas or Leo – on the beach in Ventnor, just south of Atlantic City.

My wife and I are going to Ventnor this weekend. I haven’t been to the beach in years, but I won’t be surprised if I see Sal or Chas or Leo shlepping  their frozen wares. It wouldn’t be summer without them.