The challenge word on sugarfrostedgoodness.com this week is “winter wonderland“. 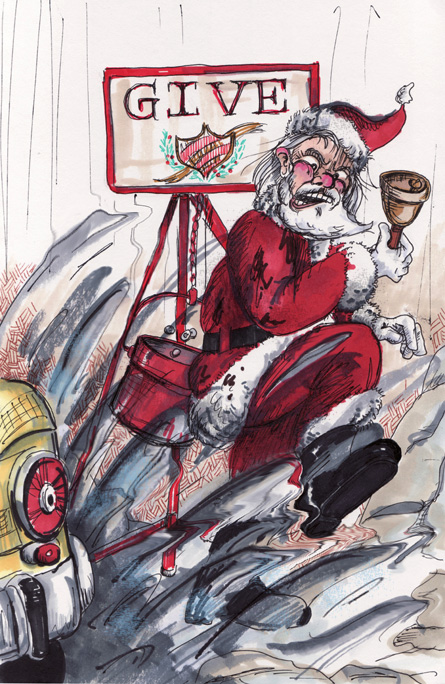 No wait, let me reconsider.

As far as I can see, snow serves no purpose. It isn’t good for crops. It kills crops. It is dangerous for driving. Earlier this year, a snowstorm closed a large section of the Pennsylvania Turnpike and left hundreds of drivers stranded. Several years ago, my normal 50-minute commute home from work was increased to a tedious ten hours due to snow.

Snow causes inconvenience for workers and businesses. Shoppers, about to venture to the mall, are disouraged by TV weathermen. Instead, those same shoppers flock to the supermarket to stock up on milk, bread and eggs – fearing a lengthy snowstorm will trap them indoors for months without French toast.

I have no pleasant memories of snow. None. When I was a kid, I remember my father standing at the open front door, with a cigarette in one hand and a scowl on his face, watching the snow fall and muttering “Shit! Shit! Shit!” under his breath. Then, he would watch the evening weather forecast and curse even more as the weatherman predicted (as my father would put it) “plenty inches”.

I remember my one and only attempt at sledding. I banged the front of my sled against a large ice chunk buried in the snow, which in turn, banged into my mouth, which in turn, blew up like an innertube.

Years later, I remember having several co-workers who had grown up in Florida. During the night, six inches of snow had fallen. It made my drive to work slow and horrendous. When I finally arrived, my southern co-workers were out in the parking lot taking pictures and giggling.

I have also spent many a weekend day shovelling snow from my sidewalk. I don’t like to shovel anything. Ever.

In addition, I have less than fond memories of sitting in the passenger seat, as my wife navigated the car through a blinding snowstorm on an eight-hour, white-knuckle trek across Pennsylvania on a return trip from Cleveland.

I hear a lot of people say, as the snow is falling, “Oh, look at the snow. It’s so pretty. It looks so nice up in the trees.” And then they are silent several days later, when the snowplows and car exhaust and dirty boots have turned the “crisp blanket of white” into a gray-black-brown, drippy, chunky sludge, piled into eight-foot high mountains in shopping center parking lots.

If Irving Berlin hadn’t have picked up a pen in 1940, no one would be dreaming of a white Christmas with every Christmas card they write.