The challenge word this week on illustrationfriday.com is “canned”. 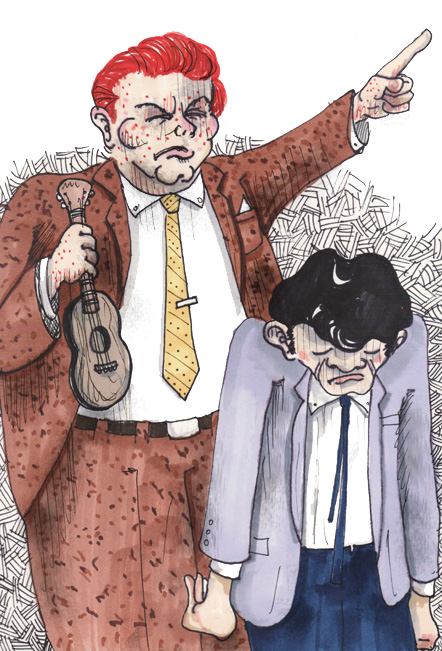 Arthur Godfrey ranks as one of the important on-air stars of the first decade of American television. As the new medium was invading American households, there was something about Godfrey’s wide grin, his infectious chuckle, his unruly shock of red hair and his folksy ukelele playing that made millions tune in not once, but twice a week.
His on-air delivery of sponsor Lipton Tea’s commercials had the American public rushing to their local grocers. No television viewer during the 1950s doubted that Godfrey really did love Lipton Tea and drank it every day. He delighted in tossing aside prepared scripts and telling his audience: “Aw, who wrote this stuff? Everybody knows Lipton’s is the best tea you can buy. So why get fancy about it? Getcha some Lipton’s Tea”. And, boy, did they!
However, when the cameras were off, Godfrey was a crazed, anti-Semitic, controlling megalomaniac. Godfrey ruled his cast with an iron-fist and he took no shit from them. He knew that when someone appeared on his show, their popularity was instant. So, his inflated ego felt entitled to make demands. He insisted his “Little Godfreys” (as his regulars were known) attend dance and singing classes, believing all should be versatile performers. In meetings with the cast and his staff, Godfrey was abusive and intimidating. In spite of his ability to bring in profits, CBS owner William Paley disliked Godfrey. Frank Stanton, CBS president, liked Godfrey, especially because he kept show production cost down.
In 1951, a mutual friend introduced Godfrey to a young singer named Julius LaRosa. Godfrey gave LaRosa a break and put him on his show. LaRosa proved popular and became a frequent guest performer on Godfrey’s show. Along with the rest of the cast, LaRosa was required to take dance lessons. He missed one due to a family emergency. When he arrived at the studio, he was advised via a cast bulletin board, that his services were not required for that week’s show. Soon afterwards, LaRosa had a national hit record with “Eh Cumpari”. He began to receive fan mail that topped the amount that Godfrey was receiving. LaRosa also hired his own agent, something Godfrey was adamantly against. Godfrey felt he was detecting a bit of “cockiness” in LaRosa’s attitude.
In October 1953, Godfrey consulted with CBS president Stanton. Stanton suggested Godfrey actually fire LaRosa on the air, however conflicting stories indicate that he may not have been serious. Nonetheless, after lavishing praise on LaRosa in introducing the singer’s performance, Godfrey thanked him and then announced that this was LaRosa’s “swan song” with the show. LaRosa had to be told what the phrase “swan song” meant. He was dumbfounded, since he had not been informed beforehand of his departure. LaRosa was so popular at the time, America seemed to side with him… a reaction that Godfrey never expected.
As time went on, Godfrey’s own popularity waned, eventually making him a dinosaur among the fleeting and fickle world of television.