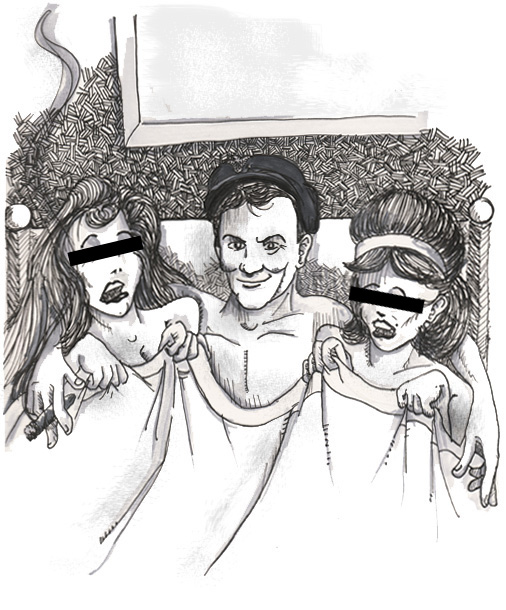 In 1956, Bob Crane was the number one morning disc jockey on Los Angeles’ KNX-AM radio. He filled the broadcast with sly wit, drumming, and guests such as Marilyn Monroe, Frank Sinatra, and Bob Hope. Crane became known as “The King of the Los Angeles Airwaves.” With high ambitions, Crane pursued acting opportunities. He subbed for Johnny Carson on “Who Do You Trust?” and acted on shows like “The Twilight Zone,” “Alfred Hitchcock Presents,” and “General Electric Theater.” Crane’s one episode performance on the “Dick Van Dyke Show” led to his recurring role as neighbor Dr. Dave Kelsey on the “Donna Reed Show“. Crane’s career was taking off.

In 1965, Crane was offered the starring role in a comedy pilot about Allied prisoners in a German P.O.W. camp, “Hogan’s Heroes.” Crane was nominated for an Emmy twice for his role of the wisecracking Colonel Robert Hogan. During the run of Hogan’s Heroes, Crane met Patricia Olsen (who used the name Sigrid Valdis). Crane divorced his wife of twenty years, and married Patricia on the set of the show in 1970.

There was another Bob Crane that was kept hidden from the public. Crane was obsessed with sex and with sleeping with as many different women as humanly possible. And in the way that some collectors amass stamps or coins, Crane took hundreds and hundreds of explicit photographs of his conquests, including snapshots of himself engaged in sex with these women. He frequented Hollywood strip clubs and topless bars and rarely left alone. Crane departed the “Donna Reed Show”, some say because of a sexually aggressive attitude toward his stage wife. Crane’s first wife and Patricia both turned a blind eye to Crane’s exploits for as long as they could. Crane actually had an affair with the two actresses who played Colonel Klink’s secretary (the latter being Patricia Olsen).

“Hogan’s Heroes” co-star (and future Family Feud host) Richard Dawson introduced Crane to video salesman John Carpenter who shared Crane’s interest in photography and, as it turns out, sex. Carpenter supplied early versions of video technology (including early VCRs), and he’d often participate in and film group sex with the women that Crane would meet.

In 1971, after six seasons, CBS canceled “Hogan’s Heroes”. Not wanting to let his career decline, he appeared in numerous one-shot guest roles on network series. He made two movies for Disney. NBC gave him another shot at his own series. That lasted three months. Crane purchased the rights to the play “Beginner’s Luck” and toured the U.S. in productions as its director and star. The play brought Crane to Scottsdale, Arizona.

On Wednesday, June 28, 1978, after completing an evening performance and signing autographs for fans in the lobby, Crane returned to his apartment with Carpenter. Before they left again, Crane argued loudly on the phone with Patricia. Crane and Carpenter then headed to a local bar, where they had drinks with two women whom they had arranged to meet. At about 2:00 A.M., the foursome went to a coffee shop. About half an hour later, Carpenter left to pack for his return trip to Los Angeles the next morning. Back at his hotel room, Carpenter called Crane one final time. Crane was considering ending his lifestyle of heavy partying, and during this last phone call, Crane reportedly told Carpenter that their friendship was over.

Just after 2 p.m. on June 29, Victoria Berry, Crane’s co-star in “Beginner’s Luck”, decided to drop in on Crane at his apartment. After her knock received no answer, she tried the door knob. It was unlocked and the door swung open. When she entered the apartment bedroom she stopped and paused. Crane was lying in a fetal position in the bed. There was a huge dark area behind his head with great sweeps of blood on the wall. His face was so badly beaten that he was unrecognizable from the left side. A video cord was wrapped around his neck.

Approximately 50 pornographic videotapes were found in Crane’s apartment, as well as professional photography equipment in the bathroom for developing and enlarging still shots. A negative strip was found in the enlarger, revealing a woman in both clothed and nude poses. Circumstantial evidence pointed to John Carpenter. Police officers who arrived at the scene of the crime noted that Carpenter called the apartment several times and didn’t seem surprised that the police were there. Further investigation revealed several blood smears were found in Carpenter’s car that matched Crane’s blood type. At that time DNA testing didn’t exist to confirm if it was Crane’s or not. Not enough solid additional evidence could be produced and the case went cold.

In 1992, fourteen years after the murder, the case was reopened. An attempt to test the blood found in the car failed to produce any result due to improper preservation of the evidence. At Carpenter’s trial in 1994, the prosecution showed a videotape of Crane and Carpenter engaging in sex with the same woman to demonstrate their close relationship. However, Carpenter was acquitted on a lack of convincing evidence.

Carpenter died in 1998. He maintained his innocence to the end.

Here’s Bob Crane – not being Hogan and not having sex.