The challenge on illustration friday is “trick or treat“, in honor of Halloween. 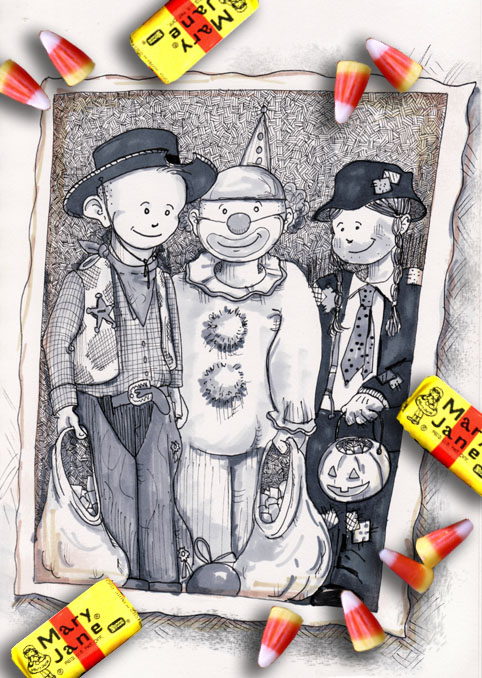 Ahh, the ancient tradition of “trick or treat”, with its origins steeped in European custom. Ancient? European?

The earliest appearance, in a national publication, of the phrase “trick or treat” was in 1939. In her 1919 history of the holiday, “The Book of Hallowe’en,” author Ruth Edna Kelley makes no mention of such a custom.

Trick or treating is a purely American custom, with no religious history or connotations. The earliest reference to ritual begging on Halloween in America occurs in 1915, with another isolated reference in Chicago in 1920. The thousands of Halloween postcards produced between the turn of the 20th century and the 1920s commonly show children but do not depict trick-or-treating.

Early national attention to trick-or-treating was given in October 1947 issues of the children’s magazines, such as Jack and Jill, and by Halloween episodes of the network radio programs The Baby Snooks Show in 1946 and The Jack Benny Show and The Adventures of Ozzie and Harriet in 1948. The custom had become firmly established in popular culture by 1952, when Walt Disney portrayed it in the cartoon Trick or Treat, Ozzie and Harriet were besieged by trick-or-treaters on an episode of their television show, and UNICEF first conducted a national campaign for children to raise funds for the charity while trick-or-treating.

Although some popular histories of Halloween have characterized trick-or-treating as an adult invention to rechannel Halloween activities away from vandalism, nothing in the historical record supports this theory. To the contrary, adults, as reported in newspapers from the mid-1930s to the mid-1950s, typically saw it as a form of extortion. Likewise, as portrayed on radio shows, children would have to explain what trick-or-treating was to puzzled adults, and not the other way around. Sometimes even the children protested: for Halloween 1948, members of the Madison Square Boys Club in New York City carried a parade banner that read “American Boys Don’t Beg.”

In addition, there has never been an incident of random Halloween candy poisoning reported to any law-enforcement agency in any municipality in this country. Ever. The few that have been reported were later revealed to be targeted attacks that were covered up to look like a random act.

Happy Halloween. You are carrying on a tradition that is just a bit younger than my parents.