The challenge word on sugarfrostedgoodness.com this week is “joy”.
This is the first of two illustrations for the topic. 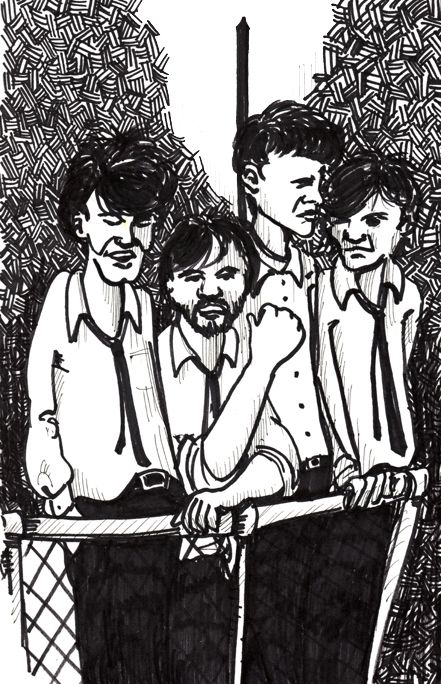 Joy Division were an English rock band formed in 1976 in Greater Manchester. The band consisted of Ian Curtis, Bernard Sumner, Peter Hook and Stephen Morris.
Joy Division rapidly evolved from their initial punk rock influences, developing a sound and style that helped pioneer the post-punk movement of the late 1970s. Joy Division’s debut album, Unknown Pleasures, was released in 1979 on independent record label Factory Records, and drew critical acclaim from the British press. Despite the band’s rapid success, vocalist Ian Curtis was beset with depression and personal difficulties, including a dissolving marriage and his diagnosis with epilepsy. Curtis found it increasingly difficult to perform at live concerts, and often had seizures during performances.
On the eve of the band’s first American tour, Curtis, overwhelmed with depression, committed suicide. Early on the morning of May 18, 1980, Curtis hanged himself in his kitchen. Curtis’s wife Deborah, discovered his body when she returned around midday.
Joy Division’s posthumously released second album, Closer, and the single “Love Will Tear Us Apart” became the band’s highest charting releases. After the death of Curtis, the remaining members reformed as New Order, achieving significant critical and commercial success.