The challenge word on sugarfrostedgoodness.com this week is “joy”.
This is the second of two illustrations for the topic. 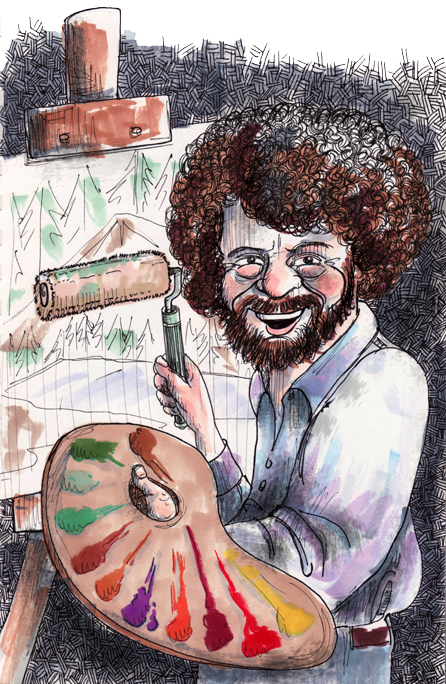 With his calm, patient nature, Bob Ross came to prominence as the creator and host of The Joy of Painting, a long-running instructional program braodcast on public television. The show continues in reruns, even after Ross’s death in 1995.
Ross spent twelve years keeping medical records for the U.S. Air Force, which is where he first started painting. After leaving the Air Force, he studied with William Alexander before becoming famous worldwide with his own television program, The Magic of Oil Painting, also a public television staple.
During each half-hour segment of The Joy of Painting, Ross would instruct viewers in the art of oil painting using a quick-study technique that kept colors to a minimum and broke paintings down into simple steps that anyone could follow. Ross acknowledged that the appearances of the landscapes he painted were strongly influenced by his years living in Alaska, where he was stationed for the majority of his Air Force career.
He repeatedly stated on the show his belief that everyone had artistic talent and could become accomplished artists given time, practice, and encouragement, and to this end was often fond of saying, “We don’t make mistakes, we just have happy little accidents.” When asked about his laid-back approach to painting and eternally calm and contented demeanor, he once commented: “I got a letter from somebody a while back, and they said, ‘Bob, everything in your world seems to be happy.’ That’s for sure. That’s why I paint. It’s because I can create the kind of world that I want, and I can make this world as happy as I want it. Shoot, if you want bad stuff, watch the news.”
Ross utilized the wet-on-wet oil painting technique, in which the painter continues adding paint on top of still wet paint rather than waiting a lengthy amount of time to allow each layer of paint to dry. Combining this method with the use of giant house-painting brushes, large painting knives and fan brushes allowed Ross to paint trees, water, clouds and mountains in a matter of seconds.
In many episodes of The Joy of Painting, Ross noted that one of his favorite parts of painting was cleaning the brush, specifically the act of drying off a brush, which he had dipped in cleaner, by rapping it against the easel frame. He would often smile and even laugh out loud regularly during this practice as he, in his words, “Beat the devil out of it”.