The illustrationfriday.com word this week is another abstract one. The word is “theory”. 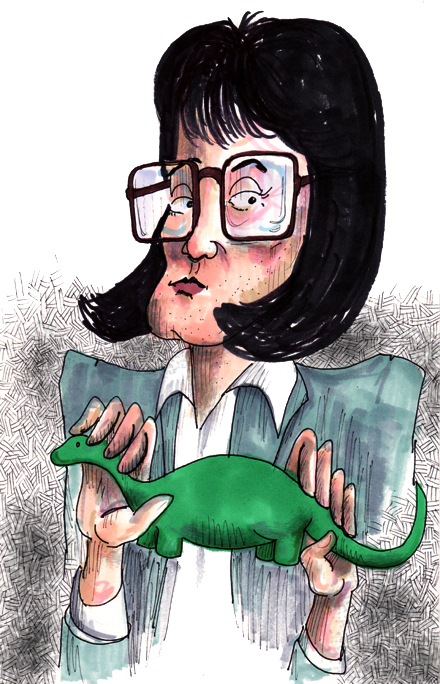 “Anne Elk’s Theory on Brontosauruses” is a sketch from an episode of Monty Python’s Flying Circus.
This skit features Graham Chapman as a television interviewer and John Cleese in preposterous drag as the palaeontologist, Anne Elk.
The plot of the skit is that the interviewee, Anne Elk, cannot bring herself to describe the actual basis of her supposed new palaeontological theory on brontosauruses. Ms. Elk spends most of the interview clearing her throat and making assertions like “My theory, which belongs to me, is mine.”
In the end, Miss Elk’s theory on brontosauruses is revealed as “All brontosauruses are thin at one end, much thicker in the middle and then thin again at the far end.” Her true concern is that she receive full credit for devising this new theory stating, “That is the theory that I have and which is mine and what it is, too.” The interviewer, is disbelief, answers, “Well, Anne, this theory of yours seems to have hit the nail right on the head.” To which Anne adds, ” … and it’s mine.”
The skit coined the concept of “Elk Theories” to describe scientific observations that are not theories but merely minimal accounts.