The challenge this week on sugarfrostedgoodness.com is “fire“. 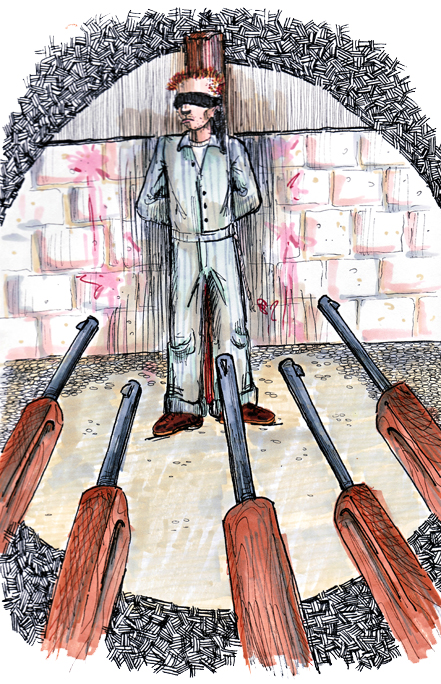 Edward Slovik was arrested and served jail time for several incidents of petty theft, breaking and entering and disturbing the peace, between 1937 and 1939. Slovik was classified as unfit for duty in the U.S. military because of his criminal record.

He met Antoinette Wisniewski while working at a plumbing company in Dearborn, Michigan, and the two were married in 1942. The intensity of World War II forced the military to lower their standards in order to meet demands for replacement troops. As a result, Slovik’s draft classification was changed and he was drafted into the infantry in January 1944.

During training, Slovik earned the reputation of being a good-natured buddy and learned to fire a rifle (which he hated) and other weapons. He was assigned to the 28th Infantry Division, stationed in France.

En route to the front, when his group of replacements was fired on, they stopped and dug in. Slovik and a friend became separated from the others. The two men soon came upon a camp of Canadian infantry and “joined” it, remaining with them for six weeks. Slovik finally rejoined his division, but he deserted almost immediately upon returning, ignoring the pleas of a friend not to leave. Slovik informed his company commander that he was “too scared” to serve in a rifle company and asked to be reassigned to a rear area unit. Slovik told the commander that he would run away if he were assigned to a rifle unit and asked him if that would constitute desertion. The commander confirmed that it would and refused his request for reassignment, assigning him to a rifle platoon.

A day later, Slovik voluntarily surrendered to an officer of the 28th Infantry Division, handing him a signed confession of desertion. However, he firmly stated he would run away again if forced to go into combat. The officer warned Slovik that his written confession was damaging evidence and advised him to destroy it. Slovik refused and he was confined in the division stockade.

Just prior to trial, the division judge offered Slovik a deal under which the court-martial action would be dropped if he would go back to his unit. Slovik refused. As a result, Slovik was tried and convicted of desertion, although he pleaded not guilty at the trial. The sentence of death was voted unanimously.

Slovik wrote a letter to General Dwight D. Eisenhower pleading for clemency, but no basis for clemency was found. On December 23, in the midst of the Battle of the Bulge, Eisenhower confirmed the death sentence. It was held that he “directly challenged the authority” of the United States and that “future discipline depends upon a resolute reply to this challenge.” Slovik was to pay for his defiant attitude and he was to be made an example.

Slovik was executed by firing squad in January 1945. None of the riflemen so much as flinched, believing Slovik had gotten what he deserved. Slovik’s last words were “They’re not shooting me for deserting the United Stated Army – thousands of guys have done that. They’re shooting me for bread I stole when I was 12 years old.”

Although over twenty-one thousand soldiers were given varying sentences for desertion during World War IIincluding forty-nine death sentencesonly Slovik’s death sentence was carried out. He remains the only American soldier to be executed for desertion since the Civil War.

The man didnt refuse to serve, he just refused to kill.