The challenge this week on Monday Artday is “getting ready”. 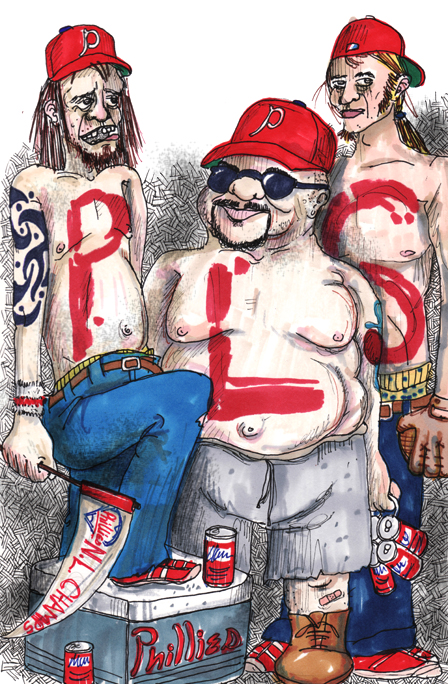 …for Opening Day!
I have mentioned before. I love baseball. I love watching baseball. I love going to baseball games. There are some things I don’t like about baseball (namely Brett Myers), but overall, I love it.
I have been a Phillies season ticket holder since 1996. That means I suffered through some pretty lousy years. I saw some seasons end with the Phillies so close to a championship, only to blow it in the final week. Last season, of course, was different. The Phils won the National League East pennant on the last day of the season. I was there. I was there among a deafening crowd. A crowd that screamed for nine straight innings. A crowd made up, mostly, of people who had never been to a baseball game in their lives and were merely jumping on the “post-season bandwagon”. Every one of them had loved the Phillies since…well….last week. As it played out, the Phillies post-season lasted three games and the temporary Phillies fans went back to follow the pathetic Philadelphia Eagles or American Idol.
I wouldn’t consider myself a “Phillies Fan”. It’s just that I love baseball and I live in Philadelphia so I have no choice if I want to see a baseball game. Sure, there are several minor leagues in the area. But, if I want to see minor league-caliber baseball, I’ll stick with the Phils.
I also worked as a soda vendor at Veterans Stadium when I was a kid. Veterans Stadium was home to the Phillies for 33 seasons. “The Vet” was, thankfully, imploded in March 2004. In April 2004, Citizens Bank Park opened. The new home of the Phillies is a beautiful, state-of-the-art facility that rivals many of the great parks in Major League Baseball. I’ve been to other parks in other cities. Citizens Bank Park is one of the best. Just hurry up and see it before the Phillies fans shit it up.
The Philadelphia sports fan. An unusual creature, that fan. They are nationally known for their aggressive and angry behavior. Everyone knows that we are the fans that booed Santa Claus. I’ve seen a player make a spectacular, multi-run saving catch in the top of an inning and come up to bat in the same inning, pop-up and get chided by the same crowd, like he just shot their dog.
And it’s THESE guys.
These guys show up every year. (If not them, then someone like them.) On Opening Day, they love the Phillies. They’ll scream, “The Phillies are going ALL THE WAY, BABY! ALL THE WAY TO THE FOOKIN’ WORL’ SERIES! DA METS FOOKIN’ SUCK! THE PHILS ARE DA BEST!”
Until the first time Pat Burrell stands at the plate with his bat on his shoulder, thinking about his fifty million dollar contract, while three balls sail unfettered through his strike zone.
Then, the screams become, “THEY SUCK! DA PHILLIES SUCK! Hey, where’s the beer guy?”