I love baseball. I love watching baseball. I love going to baseball games. I wouldn’t say that I am an expert on the game, as I haven’t really been following it for a long time. I don’t pay attention to intricate or obscure stats. I don’t know the game inside and out and I don’t really care to. I enjoy a hot Sunday in the summer, sitting in the stands, drinking a soda, getting my seat kicked by some kid who is shoving cotton candy and ice cream into his mouth while asking his dad “Which one is Chips Utley?”, and watching a bunch of overpaid cry-babies play a game that seven-year olds play. But, there are certain things I don’t like about baseball. 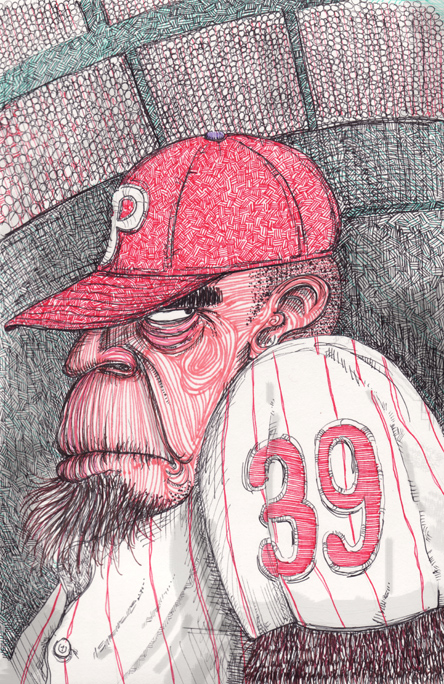 For some reason, baseball players have been put in the postion of role models. I suppose it’s because everyone loves a hero. Maybe because baseball players command adoration while equipped with little or no class, manners or education. More recently, I suppose, it’s because jerks like Brett Myers can earn five million dollars for throwing a baseball for couple of innings and maybe blow a few saves in the process.

Brett Myers is the poster child for what I don’t like about baseball. Myers was arrested on June 23, 2006 and charged with assaulting his wife Kim Myers on a downtown Boston street. The Phillies received criticism from some media members and women’s organizations for not benching Myers. Myers took a short leave of absence from the team. During a pre-trial hearing on October 5, 2006, Kim Myers indicated that she did not want her husband prosecuted, and despite the prosecutor’s insistence of filing charges, the case was dismissed. The couple has been in marriage counseling since the arrest.

Not content with being a wifebeater, Myers set out to show the fans and the press that he is an asshole, too. Myers’ hot temper landed him in a confrontation with Philadelphia Inquirer beat writer Sam Carchidi, after Myers gave up two home runs, including the go-ahead homer, against the San Diego Padres on August 25, 2007. After Myers made light of the homers, Carchidi asked him if he thought the home run balls he gave up were pop ups. Myers responded by calling Carchidi “a fuckin’ retard”, which was followed by Carchidi sarcastically asking him how to spell “retard”. That set Myers into a profanity-laced verbal fight with Carchidi, while other members of the Phillies and Philadelphia media tried to separate the two. Pat Burrell was one of the people holding back Myers. (I’ll save my Pat Burrell joke for another time.)

I see Myers as a loutish gorilla and I draw ’em as I see ’em.