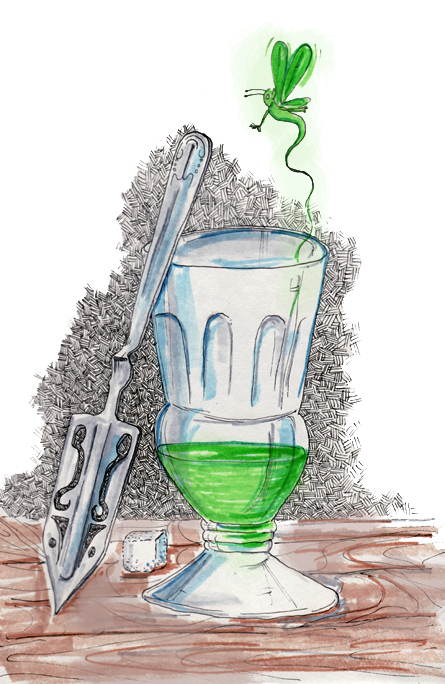 Absinthe is a distilled, highly alcoholic beverage anise-flavored spirit derived from herbs including the flowers and leaves of the medicinal plant Artemisia absinthium, also called grand wormwood or Absinth wormwood. Absinthe is typically green (either naturally or with added color) or clear and is often referred to as la Fée Verte (‘The Green Fairy’). Although it is sometimes mistakenly called a liqueur, absinthe is not bottled with added sugar and is therefore classified as a liquor or spirit. Absinthe is uncommon among spirits in that it is bottled at a high proof but consumed diluted with water to the strength of wine.
Traditionally, absinthe is poured into a glass over which a specially designed slotted spoon is placed. A sugar cube is then deposited in the bowl of the spoon. Ice-cold water is poured or dripped over the sugar until the drink is diluted 3:1 to 5:1. During this process, the components that are not soluble in water, mainly those from anise, fennel and star anise, come out of solution and cloud the drink.
The Lanfray murders of 1906 caused a petition to the Swiss government leading to its outlawing in Switzerland, and, as a chain reaction, other countries. By 1915, it was banned in a number of European countries and the United States.