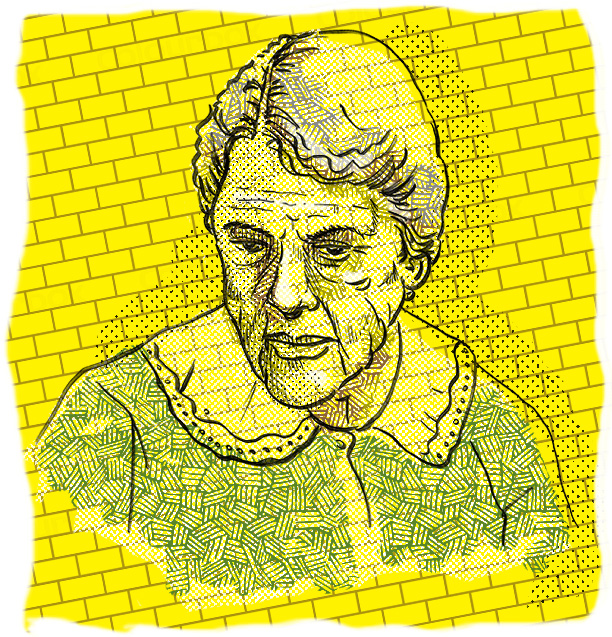 In the 1930s, Hollywood placed many actresses on the “goddess” pedestal. There was Barbara Stanwyck, Carole Lombard, Betty Grable, Jean Harlow, Lana Turner and many others. There were other actresses, appearing in hundreds of movies, who never achieved “goddess” status. Clara Blandick falls into this category.

Clara was born in 1876 on a ship, captained by her father, harbored in Hong Kong. Her parents eventually settled in Quincy, Massachusetts and she began her acting career at age 24. After numerous successes in many stage plays, Clara moved to Hollywood in 1929. Though she landed roles like Aunt Polly in the 1930 film Tom Sawyer (a role she reprised in the 1931 film Huckleberry Finn), she spent much of the decade as a character actor, often going uncredited. At a time when many actors were permanently attached to a single studio, Clara played a wide number of bit parts for almost every major Hollywood studio. In 1930, she acted in nine different films. In 1931 she was in thirteen different films. It’s impossible to make an exact tally of the films in which Clara appeared. A reasonable estimate would fall between 150 and 200.

Her most famous role was that of Dorothy’s Aunt Em in 1939’s The Wizard of Oz. Clara filmed all her scenes in a single week, for which she was paid $750. Although it was a small part, the character was an important symbol of protagonist Dorothy’s quest to return home throughout the film. After The Wizard of Oz, Clara returned to her staple of character acting in supporting and bit roles. She would continue to act in a wide variety of roles in dozens of films, including a surprised customer in the 1941 Marx Brothers film The Big Store and a cold-blooded murderer in the 1947 mystery Philo Vance Returns. Her final two roles both came in 1950 — playing a housekeeper and a landlady in Key to the City and Love That Brute respectively. Poor health forced Clara to retire soon after.

Throughout the 1950s, Clara’s health steadily began to fail. She started going blind and began suffering from severe arthritis. On April 15, 1962, she returned home from Palm Sunday services at her church. She began rearranging her room, placing her favorite photos and memorabilia in prominent places. She laid out her resume and a collection of press clippings from her lengthy career. She dressed in an elegant royal blue dressing gown. Then, with her hair properly styled, she took an overdose of sleeping pills. She lay down on a couch, covered herself with a gold blanket over her shoulders, and tied a plastic bag over her head. Clara left the following note: “I am now about to make the great adventure. I cannot endure this agonizing pain any longer. It is all over my body. Neither can I face the impending blindness. I pray the Lord my soul to take. Amen.” Her body was found by her landlady.

After researching Clara and her chosen method and ritual of dying, I have watched her in The Wizard of Oz differently than before.

She will never be remembered as a silver screen goddess.