The challenge word this week on illustration friday is “scale“. 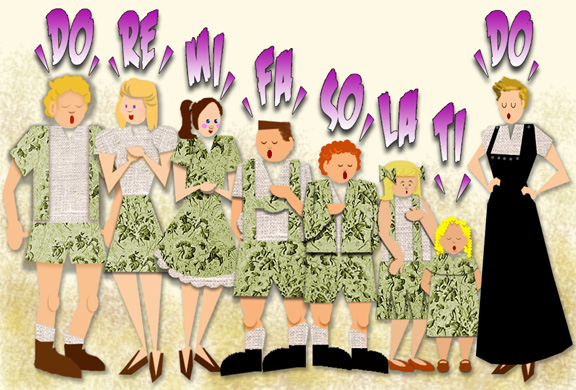 The Sound of Music portrayed the life of Maria Kutschera, a young woman studying in a Roman Catholic sisterhood, and her relationship with widower Georg Ritter von Trapp and as governess to his children. Details of the history of the von Trapp family were altered for the musical. Georg Ritter von Trapp lived with his family in a villa in Aigen, a suburb of Salzburg. The real Maria was sent to be a tutor to one of the children, not a governess to all of them. The Captain’s oldest child was a boy, not a girl, and the names of the children were changed (at least partly to avoid confusion: the Captain’s eldest daughter was also named Maria). The von Trapps spent some years in Austria after Maria and the Captain married — they did not have to flee right away — and they fled to Italy, not Switzerland. Maria von Trapp is said to have enjoyed the stage show but to have hated the movie: her standard response to praise was, “it’s a nice story, but it’s not my story.”

I took a slightly different approach for this illustration. This was created entirely in Photoshop.